Torquemada is a location featured in Red Dead Redemption. It is a settlement and a Mexican Army base of operations in the Diez Coronas region of the Nuevo Paraiso territory.

Torquemada is a tiny village, perched atop a tall mesa with a spectacular view of Diez Coronas. The Mexican Army has invaded this settlement and killed all of the rebels in one legendary battle.

It plays a major role in the Vincente de Santa mission "Empty Promises".

After Marston helps Abraham Reyes and his rebels overthrow Colonel Allende's regime, the Mexican Army will no longer spawn in any settlement other than El Matadero and Torquemada, where they will remain on guard.

Torquemada has some snakes on the ground between buildings, and by the fence lines during the day.

During the Undead Nightmare, this is one of 23 locations that must be cleared of the Undead and then protected from re-infestation thereafter. Once cleared for the first time, the player will receive the Pump-action Shotgun. People found defending the settlement are: Aurelio Canizales, Esteban Aguilar, Cesar Deguzman, and Carlitos Borrego.

This is also the location of Ramon Alvares, the second missing person to be rescued in the El Presidio segment of the Missing Souls Side-missions. The field northwest of the town is the only known location of the Unicorn, and a confirmed location of the Chupacabra.

The marker for the town is located north of the town itself, and if the player goes to the marker, they will see a small shelter with no survivors. The Undead will very rarely spawn there.

The view of Diez Coronas from the tower at Torquemada.

An overhead shot of the path to Torquemada. 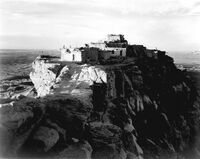 Torquemada with rebels
Add a photo to this gallery

Retrieved from "https://reddead.fandom.com/wiki/Torquemada?oldid=299670"
Community content is available under CC-BY-SA unless otherwise noted.