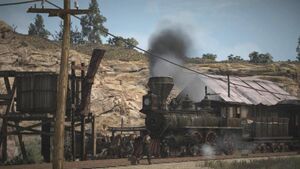 Trains, or steam locomotives, are the second most used method of travel across the vast expanse of the West (after horses). The railroads are the lifeblood of the American Continental West during the time period of Red Dead Revolver and Red Dead Redemption.

Several missions in Red Dead Revolver take place within, on top of, and alongside trains. The player first rides in a train during the mission "Railroaded", then proceeds to fight along the top of the train in the subsequent mission "The Traincar". This railway line, which runs between Widow's Patch and Brimstone, is known as the Pan-Atlantic Railroad. It is featured in Sheriff Bartlett's Journal on pages 296-299. Hank Pullman is the train conductor.

In the mission "End of the Line," Red Harlow fights enemies on a train while riding alongside and while on board. General Javier Diego rides a heavily armored train on Diego's railway in an attempt to escape from Red Harlow following the assault on Fort Diego.

Marston can board trains while riding on horseback by pressing X (Xbox 360) or Square (PS3) when prompted, which triggers him to leap from his horse onto the train; the prompt appears when Marston is alongside a set of boarding steps (not open boxcar doors). While riding on the train, Marston can stand up and walk around the interior of the train, and move about the other carts by climbing on top of them. Marston can also climb into open box cars while on the roof of the car by using the appropriate button press when prompted.

Apart from the Gambling table chairs, such as Poker and Blackjack, and - in a way - the horse's saddle, the train's benches and the seats at a Movie theater are the only seats in the entire game that can be used to sit on. Simply press Y (Xbox) or Triangle (PS3) when next to a seat to sit down on it. When activated, the player will receive a series of constantly changing camera views - a majority being exterior. To stand up and leave cinema view, simply press Y or Triangle again.

Trains play a big part in the Social Club challenge "Legendary Sharpshooter", in which players must complete 3 objectives while on board a train.

The story missions Civilization, at Any Price, Mexican Caesar and The Great Mexican Train Robbery all focus on trains, although in each case it is a special Mexican Army train and not the commercial Southwestern Railroad "Red Train."

There are two train lines, each with a circuit that takes about a day to travel:

While for the most part the trains are extremely similar, there are a few differences between the two. They are outlined below. 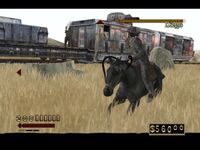 A train in Red Dead Revolver.

The old world meets the new world in a more literal example.

Trains even fills animals with fear.

Marston about to sabotage a train
IMG 0625.JPG
A shot on MacFarlane's ranch of the Red and Blue train inside of each other.

A map shot showing both trains at the station
IMG 0628.JPG
Jack Marston on the roof of a train.

Marston on top of a train

The view of the savage Mexico.

Even trains can't resist the mighty blow of dynamite.

We have arrived at Casa Madrugada.
Rdr train glitch02.jpg
Add a photo to this gallery

Trains can be used to unlock the following achievement/trophy:

Retrieved from "https://reddead.fandom.com/wiki/Trains?oldid=308349"
Community content is available under CC-BY-SA unless otherwise noted.