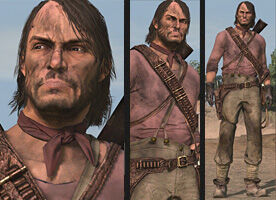 The Treasure Hunter Outfit is an outfit found in Red Dead Redemption. This outfit ensures the Treasure Hunters consider the player a friend, though a hostile act toward them will remove this effect.

"Disguise yourself as part of the Treasure Hunter gang."

This outfit consists of a dirty and frayed pink shirt, along with a pair of tan pants tucked in a pair of socks. This is the only outfit (besides the Gentleman's Attire) where Marston doesn't wear cowboy boots. It is unknown to the editor what type of boots Marston is wearing. 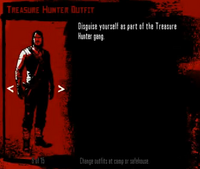 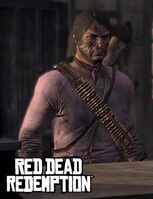 Obtaining the Treasure Hunter Outfit contributes toward acquisition of the following Achievement/Trophy:

Retrieved from "https://reddead.fandom.com/wiki/Treasure_Hunter_Outfit?oldid=404656"
Community content is available under CC-BY-SA unless otherwise noted.