View source
watch 01:22
What are Treasure Hunter Challenges?
Do you like this video?
Play Sound 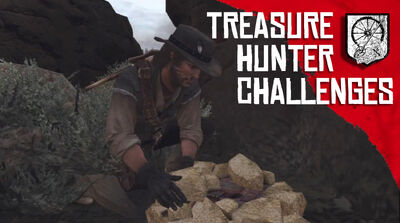 Treasure Hunter challenges are a set of challenges in Red Dead Redemption, unlocked through treasure maps to find hidden treasures.

"View the map and try to locate the treasure somewhere in New Austin. Open your satchel and choose the Treasure Map item from the Kit menu. Complete challenges to unlock rewards and become a Legend of the West."

The treasure locations are spread all across the land of Red Dead Redemption. Treasure comes in two forms:

In order to find a treasure, the player must obtain a Treasure Map, decipher it, and travel to the location depicted.

The player starts at Treasure Hunter Rank 1 and must find the treasure on the Rank 1 Treasure Map to advance to Rank 2.

Once Rank 5 is achieved, the player may ride Stagecoaches free of cost.

Once Rank 10 is achieved, the player is awarded 150 fame and given the Treasure Hunter's satchel, which allows for twice as many Consumables to be carried.

Note: The player must have the map to find the treasure. For example, the treasure at Hanging Rock can't be grabbed without Treasure Map #1. It is in the environment but without the map, no interaction occurs.

This video shows where all 9 treasures are located. For more detailed walkthroughs check out the videos below each Rank's map explanation. 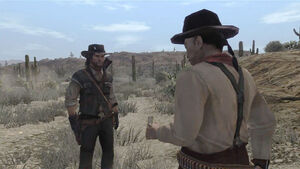 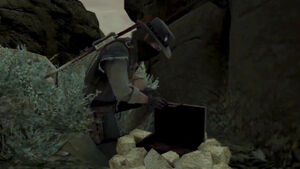 NOTE: The treasure map can be misleading; remember to interpret the map as depicting the front of The Hanging Rock in the first sketch and the back in the second, it is not showing the location in the second sketch relative to the first. The chest is hidden between the big rock and two other large ones on the north east side.

View of the location of the Rank 2 treasure. 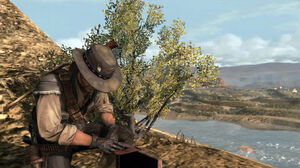 Head to Rio Del Lobo, more specifically, Del Lobo Rock. When heading south into the area, follow the main road that climbs the ridge leading to the river. When the roads end at the campsite, face the river to see the gap in the ridge indicated on the treasure map. The treasure is on the other side of the rock, on a ledge. To get to it, go around the right side of the rock then keep left as you descend. Two or three "falls" later, you'll find the pile of rocks on a dirt ledge. If you get all the way down to the beach, you've gone too far.

If you hire a stagecoach to take you to end of the road at Rio Del Lobo, the driver will drop you on the Mexican side of the river in Perdido, necessitating a long ride back across the border. 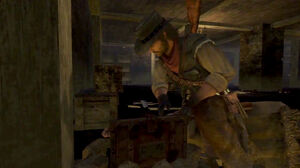 Located in the basement of the mansion in Tumbleweed. It is not difficult to find because it is under a pile of stones with a cow skull on the wall above it. Note: Upon subsequent visits here (the first visit was part of a mission) there will be more gang members and a sheriff who you must rescue. On the back side of the mansion are a set of doors down a short flight of stairs that lead directly into the basement. Sneaking up to the left side of the mansion from a different path leading into Tumbleweed, then going into the back of the mansion will avoid ANY form of a fight with gang members. This ensures that the player can go in and out without a trouble in the world. 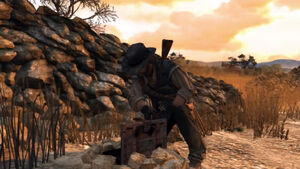 Can be found along the river bank in Rio del Toro, which is northwest of Chuparosa. Look for a tree about 15 meters (50 feet) inland adorned with cattle skulls. It's across the road from the tree behind the rock wall (the wall closest to the river) and harder to miss than you'd think. Note that John cannot access this location until Irish takes him across the river in "We Shall Be Together in Paradise".

Upon completion of this Rank, you will be able to ride stagecoaches free of charge. 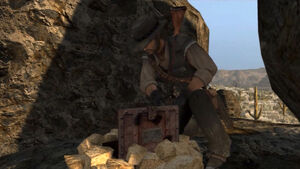 Located in Crooked Toes. You'll see a collection of rock "pillars", and the treasure is at the top of the tallest one. If you are having trouble determining which one to climb, climb the one that has an unrelated chest under it.

Note that this location is where you fight the first set of enemies in the Outlaws to the End mission "The River", after clearing out the enemies where you land at the beginning.

Rank 6 treasure is between the two top rocks. 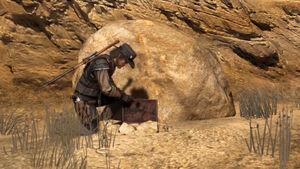 Head south from Chuparosa, and then look at your treasure map; this location is quite obvious. It is under Ojo del Diablo, or the giant rock arch. You might have to go to the left in order to get over the ledge.

The Rank 7 treasure is behind the rocks on the other ledge. 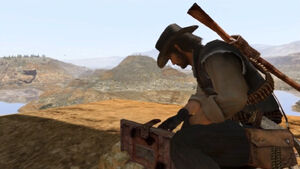 Head to Roca de Madera, which is North East of Agave Viejo. Stand next to the large rock on a column, and look west-southwest (245°). You will see a narrow path just below the top of the cliff. Follow the path around the cliff face and you will find the treasure at the end of it.

NOTE: Dismounting your horse either just before, or anywhere on this path will generally result in your horse attempting to follow you and subsequently walking off the cliff and dying. 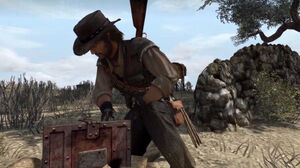 To the east of Beecher's Hope, you can easily spot a broken tree beside the road with a small weathered stone wall under it. In a gap of this wall lies treasure No. 8.

Note: The player cannot access this location until the Great Plains are made accessible via the main quest.

View of the Rank 9 treasure. 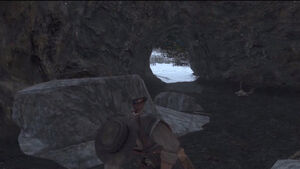 Quite easy to find. If you look at the map in the north-west of Manzanita Post right above the Tall Trees letters you'll spot a small path winding up into Nekoti Rock. Follow that path up onto the top and find the treasure in the bear cave. The treasure is located across from the chest, under a pile of rocks. Once you have collected the final treasure, you will have the Treasure Hunter's satchel.

Note: If you're playing this challenge with the Master Hunter Rank 10 Challenge active, it would be wise to be on your guard as the treasure is located in the same cave where Brumas the Bear is found.

Gold Bars can also be sold at the Doctor's Office in Blackwater for full price.