Trying Again is a mission in Red Dead Redemption 2.

John takes Jack fishing with the family dog, Rufus. They catch more than they bargained for.

Jack Marston is reading, and playing with the dog, Rufus. John asks him to go fishing, and he relents. They do agree they'd like to do more of this on the way, though. During their walk, Jack reminisces about the time Arthur used to take him fishing until the Pinkertons showed up. When John and Jack arrive at the stream, it's time to fish. After either John or Jack catches a fish, Jack notices that Rufus isn't nearby and starts looking for him. When they find Rufus, it looks like he's been bitten by a snake, and John has to suck out the poison on the dog's bad leg. When Jack gets to the house, he's upset, and proclaims that they never should have gone fishing. But John and Abigail assure him that Rufus will be okay in a few days. 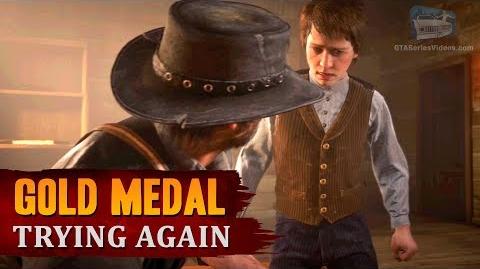 Retrieved from "https://reddead.fandom.com/wiki/Trying_Again?oldid=412431"
Community content is available under CC-BY-SA unless otherwise noted.