Tumbleweed is a location featured in Red Dead Redemption in the Gaptooth Ridge region of the New Austin territory.

Tumbleweed is a ghost town and a gang hideout. However this was once a bustling 1800's town in its prime. There are many different theories about how it got abandoned, but the most logical is that is was abandoned because the railroad was built to Armadillo and had gone completely around Tumbleweed. Not long after, everyone had moved away, causing bandits to overrun the town because of the lack of authority.

The Leigh Johnson mission "Hanging Bonnie MacFarlane" ends at this location. The Seth Briars mission "A Gentle Drive with Friends" ends here and leads directly to the mission "Let the Dead Bury Their Dead" which takes place entirely in this location.

A portion of the Stranger side-mission "Who Are You to Judge?" takes place in this location.

A sizable battle with Walton's Gang occurs here in the Outlaws to the End Co-op mission "The Escape".

During the Undead Nightmare, Tumbleweed has one of three New Austin cemeteries that will need to be cleaned of the Undead to complete the mission "Get Back in That Hole, Partner".

Like Jorge's Gap, Tumbleweed is filled with undead making exploring the buildings dangerous.

It does not need to be saved from undead, as it is one of the few Gang hideouts which are abandoned.

Tumbleweed has several buildings all in various states of disrepair. 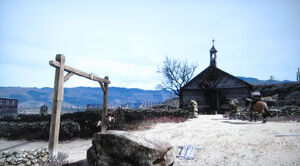 Located on the far east side of the town, the small church in Tumbleweed is white clapboard with a small steeple. It is all one room and has only eight pews with a pulpit at the front. Despite a few holes around the building, it may be the most well preserved structure in Tumbleweed. Also, inside there are words written on the pulpit that read, "The devil has got into that beast." Outside, there is a small shed and a small cemetery. Oddly enough, some of the headstones look new, while others have long since faded. The entire property is enclosed by a stone and wrought iron fence. In the northwest corner of the graveyard is a slightly crumbled grave marker of a lady named "Elenora Riddick", if you throw a fire bottle at this grave it opens, revealing what appears to be an empty coffin. This is the grave that Seth was searching on his last mission. 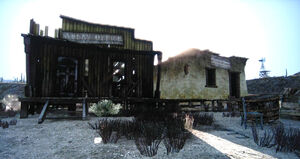 The General Store is located on the east side of Tumbleweed, and is made of wood reinforced stucco. Inside are three barrels, a counter, a small shelf, and a cash register. Remnants of curtains flap in the wind. 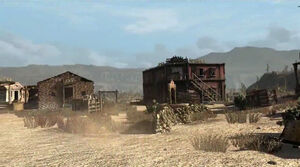 A typical western saloon. The Tumbleweed saloon is the northernmost structure in Tumbleweed. It contains an old bar littered with empty and broken liquor bottles, a piano, the remnants of various mounted animals, a wagon wheel chandelier, and an office upstairs. Curiously, the clock on the wall is still functioning despite age and neglect. In Free Roam there is a Bolt Action Rifle located in the office. 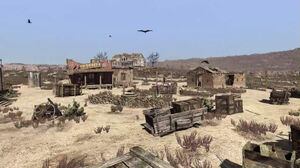 A large, one room sheriff's office. All that remains is one desk, and 3 chairs. It is on the west side of town. Next to it, a derelict brick jail, separated into three rooms, with the rusted remains of one jail cell. It can be found at the northwest side of town, to the west of the Saloon. 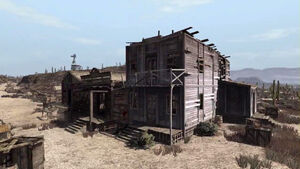 On the south side of the town, there are three unmarked buildings in a row that were probably apartments and/or houses. They all contain at least two beds and several moonshine bottles. 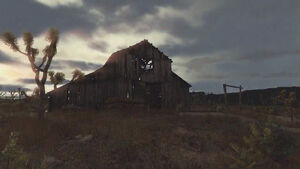 The southernmost structure in Tumbleweed, this barn was meant for keeping horses. The area is littered with junk like anvils, spittoons, and wagon wheels. Sometimes, tamed nags (old horses) will spawn in the corral. 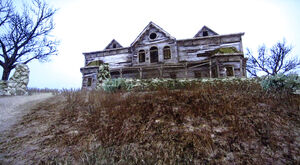 The mansion is by far the largest structure in Tumbleweed. It is situated on a ridge at the westernmost part of Tumbleweed. The grounds around the mansion host a small stable, a gazebo, abandoned wagons, and various garbage. The wooden mansion was built on a brick foundation, with a cellar. It is one of a few buildings in the game that has a cellar.

The cellar is walled in brick, with three unevenly sized brick support posts, and a wood wall creating a horseshoe configuration. The floor is dirt. There are various containers, boxes and chairs, as well as a casket, and a mattress. The floor is littered with garbage. A bull's skull marks the location of Calhoun's Gold.

The first floor contains the front room, storeroom, and kitchen. In the front room, there is a piano, two overturned sofas, a wooden crate, a large fireplace, and a fully functional grandfather clock. The floor is littered with garbage and ceiling panels. The kitchen contains a stove, long table, and several broken chairs. The storeroom has a desk with some pots on it, some barrels, and a broken shelf.

The second floor is where all the bedrooms are located. There are two bedrooms. They each have their own bedroom space as well as an adjoining sitting room. The bedrooms are populated with various bedroom furniture such as beds, chairs, desks, armoires, nightstands, etc. There is a bedroom with a bed and a surprisingly intact chair.

Use as a gang hideout

Tumbleweed has a history of being used as a gang hideout. It plays host to several bands of gangs and unaffiliated criminals. In Single player, the protagonist can help a sheriff named Claude Banfield, to clear the town of criminals.

Tumbleweed as a ghost town

Several characters and events throughout the game vaguely hint to Tumbleweed being haunted by ghosts. This could be simply for atmosphere or some other effect; however, due to the large quantity of similar rumors concerning other Rockstar games (GTA: San Andreas, GTA IV, etc.), it is not implausible to consider that Rockstar has inserted Easter Eggs into Red Dead Redemption.

This text appears in one of the newspaper about Tumbleweed, revealing what the citizens think about the Ghost Town:

TUMBLEWEED HAUNTED?
Following recent reports of ghost sightings in the abandoned town of Tumbleweed, visitors are continuing to tell of unnatural happenings and strange feelings. Some visitors claim to have seen spirits of the dead. Others ghosts, still others, ghouls and fairies. Our reporter on the scene found no evidence but we urge readers to send us reports of any unnatural happenings in the area.

MORE GHOSTS TAKE UP RESIDENCE AT TUMBLEWEED
The town of Tumbleweed, long believed by local residents to be possessed by evil spirits has claimed the lives of dozens more men. The area was found strewn with dead bodies and weapons leading the more educated and rationally minded amongst us to conclude that this is the work of mortal rather than unearthly beings. Rumors of riches hidden in Tumbleweeds abandoned mansion may have been the catalyst for the altercation, but for the moment it remains a mystery.

Criminals are confronted at Tumbleweed.

The Tumbleweed Mansion, seen while the sun sets in the distance.

The ghost woman of Tumbleweed. This picture is considered fake.
0.14.43.jpg
The footprints on the stairs to the cellar. Later the footprints had disappeared
03.33.jpg
The butterflies/moths that circle the piano.

The treaure map hinting to where the treasure can be found in the Tumbleweed's Mansion basement.

Tumbleweed Church as seen at start of Undead Overrun. 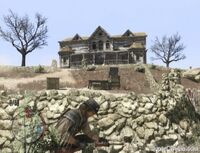 A posse clearing out Tumbleweed. 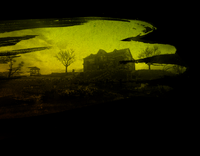 Gang battle at tumbleweed
Add a photo to this gallery

Completing the Tumbleweed hideout is associated with these gameplay achievements:

Retrieved from "https://reddead.fandom.com/wiki/Tumbleweed?oldid=293058"
Community content is available under CC-BY-SA unless otherwise noted.