Standard
The Turkoman is a horse breed in Red Dead Redemption 2 and Red Dead Online.

All coat types will need to be purchased from a stable and carry a base value of approximately $950. Turkomans are a cross between a race and war horse, and so benefit from higher overall attributes than other breeds. Its handling gives it moderate reactivity and agility.

Turkomans are multi-class with characteristics of both race and war horses. They can be identified by their slender but agile build, and also their sleek coat. The Dark Bay, Gold and Silver coats can be purchased from a stable. They handle well, but can often be impatient. They are popular due to their fantastic Health, good Stamina and fast Speed. This well-rounded horse is great for most situations.

The Turkoman is our top horse for racing or war. An Oriental horse breed, it is a bold horse known for its slender body and high endurance. The small hooves are suitable for traveling on hard and rocky ground. That, alongside their high speed, makes for a great battle horse. A hearty, healthy breed unrivaled in this line, this is one of the most sought after horses we sell.

The horse of Hosea Matthews in 1899. Silver Dollar has a "Silver" coat. Silver Dollar can be found within the gang's camp and, in the epilogue, at the stables in Tumbleweed for the player to purchase.

The horse of Sadie Adler in 1899. Bob has a "Gold Dapple" coat and can be found within the gang's camp. Bob first appears in the Clemens Point chapter, after Sadie becomes more active in the gang.

One of the Braithwaites' horses stolen by Arthur Morgan, Javier Escuella and John Marston during "Horse Flesh for Dinner". Cerberus is said to be a reliable stud, having fathered several race winners. 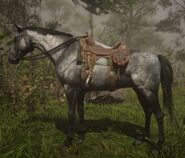 Retrieved from "https://reddead.fandom.com/wiki/Turkoman?oldid=409750"
Community content is available under CC-BY-SA unless otherwise noted.