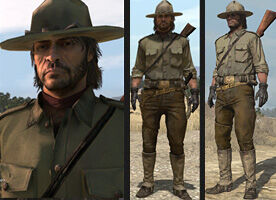 “Look like an enlisted man while wearing this uniform.”

This outfit is similar to the ones worn by other U.S. Army soldiers in the game, except that it does not have a rank insignia on the sleeve. Just like the US Marshal Uniform, when walking around Thieves' Landing, the player is more likely to be attacked than they would be if they weren't wearing it. Although screenshots released by Rockstar show John Marston wearing this uniform, it can only be obtained after the mission "The Last Enemy That Shall Be Destroyed" and can therefore only be worn in the base game by Jack.

With the Liars and Cheats DLC, the final challenge with the Explosive Rifle requires that the player kills someone while wearing this outfit.

Six scraps must be obtained by completing various tasks in order to unlock the outfit. Progress towards completion can be tracked in the outfits menu.

† = Note: Scrap is only available for purchase after completing the mission "The Last Enemy That Shall Be Destroyed".

During the mission "American Imperialism", visit the U.S. Army deserters at The Scratching Post. Either open one of the chests by the tent or assist the soldiers in fending off the undead and they will allow the player to take the uniform.

The outfit must be acquired before the player is allowed to board the U.S. Army train headed into Nuevo Paraiso. Once acquired, the outfit can be worn by the player at any time up to completing the storyline; after that point, it becomes unusable. 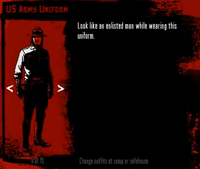 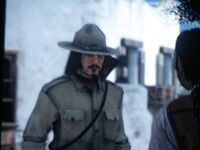 Obtaining the US Army Uniform contributes toward acquisition of the following Achievement/Trophy:

With purchasing the DLC Liars and Cheats, wearing the outfit while killing enemies will contribute towards the acquisition of the following Achievement/Trophy: