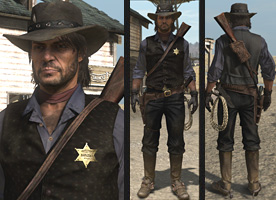 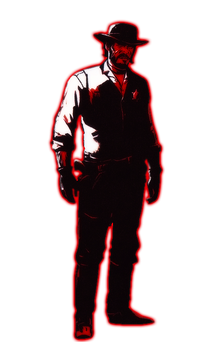 The U.S. Marshal Outfit is an outfit available to be worn by Marston in Red Dead Redemption.

The outfit is obtained by completing the five American gang hideouts within 24 hours of game time. It is required for 100% Completion and the Redeemed achievement.

Wear the U.S. Marshal outfit and the player will be considered part of law enforcement in the United States. Also, the player doesn't need to pay for a stagecoach. Even though the player is to be treated like the law, sheriffs and deputies will still come after the player if caught breaking the law, but Marshals and posses will lay off. This outfit acts the same as the Reyes' Rebels Outfit but in the U.S. If the player goes on a killing spree, they will not be pursued.

The requirements for this outfit will be shown once the mission "The Last Enemy That Shall Be Destroyed" has been completed and cannot be obtained before then. Therefore, this outfit can only be worn by Jack.

The Hideouts you have to complete in the 24 hour in-game time period are: 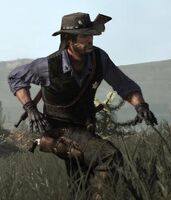 John wearing the outfit during "Political Realities in Armadillo".

Obtaining the U.S. Marshal Outfit contributes toward acquisition of the following Achievement/Trophy:

Retrieved from "https://reddead.fandom.com/wiki/US_Marshal_Uniform?oldid=291393"
Community content is available under CC-BY-SA unless otherwise noted.