Udo Kang is a minor character in Red Dead Revolver.

Udo Kang is a bandito who is wanted dead or alive for "murder and mayhem" with a bounty of $50. He is described as being of very small stature although he does not appear significantly smaller than other enemies.

As with many NPCs in Red Dead Revolver, Udo is more of a character type than a specific individual and several versions of him are encountered.

Udo is first encountered in Widow's Patch while it is overrun by the Ugly Gang. Kang, Chicken, Bob Larson, and Twiggy Phelps were walking through the streets when they encountered Red Harlow's dog. After the animal relieved itself on Kang's boots, he shot and killed the dog, causing Red to retaliate.

Later, Udo is part of the waves of attackers trying to drive Annie Stoakes from her ranch.

The player can unlock Udo Kang as a playable character in Showdown Mode by purchasing the Blanket from the General Store in Brimstone after the mission "The Cemetery". Although the blanket is listed as unlocking a journal page only, it does also unlock the showdown character.

His special ability is a random throwable item: either a Bottle, Fire Bottle, or Snake Oil.

Udo Kang is listed in Sheriff Bartlett's Journal on pages 138 - 139 under the Outlaws in Twelve States section. The pages are unlocked by unlocking his showdown character by the method noted above. 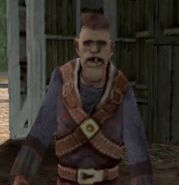 Retrieved from "https://reddead.fandom.com/wiki/Udo_Kang?oldid=398413"
Community content is available under CC-BY-SA unless otherwise noted.