Uncle was born sometime before 1849 in Ohio and is one of the oldest members of the Van der Linde gang. Uncle was nine years old when both of his parents died, forcing him to move to a new city and "live on his wits" from there on out. He was married at least twice before 1899. Not exactly the most productive gang member, Uncle was a whore-monger and drunkard who was always around when the whiskey was open, but rarely when there is work to be done.

Uncle is an elderly alcoholic and reformed petty thief. Although borderline dysfunctional, Uncle resides with the Marston family and is provided with food and shelter at the family ranch in exchange for work he rarely performs. He sometimes manages to contribute, but to his chagrin, he is often viewed by John as lazy and inept. "Uncle" is a nickname, and he is of no biological relation to any of the Marstons (John qualifies this statement with "at least I sincerely hope not.").

Uncle, in his own way, can be viewed as seeking redemption from his life of petty crime by working on the Marston ranch. This parallels the decisions of John and Abigail to leave the Van der Linde gang and live a normal life.

Uncle and Arthur take the women to Valentine, in the hopes of finding some more leads. During the excursion, Karen starts planning to rob the Valentine Bank.

Uncle got a tip about a Cornwall company train heading through Rhodes, and convinced Charles, Bill, and Arthur to help him rob it. The heist quickly goes downhill, as uncountable lawman descent upon them. The gang hides in an old barn, but is found by the law. The barn is lit on fire, and they are forced to fight their way out of the barn and engage more lawman in the forest before escaping. After dividing up the money, Uncle says that he is officially retired.

Uncle left the gang while hiding out in Beaver Hollow, along with several other members.

Uncle, having previously reunited with John in Blackwater, oversees John and Charles building John's home. While annoying John and Charles to no end, John does credit Uncle with being very helpful in getting the ranch moving in the right direction. After the house is built, Uncle is kidnapped by the barbaric Skinners gang. John and Charles hunt them down and rescue Uncle, who was badly burnt whilst being cooked alive by the Skinners.

After Abigail and Jack are abducted by Edgar Ross and held for ransom, John reluctantly puts Uncle in charge of looking after the ranch at Beecher's Hope. John is then forcibly sent to New Austin to hunt down Bill Williamson and Javier Escuella. For the duration of the pursuit of Williamson and Escuella, Marston is not in any kind of contact with Uncle. When John Marston finally returns from his quest to bring his former gang members to justice, he finds the ranch in disrepair and the livestock rustled. John continually berates Uncle for his inability to maintain the ranch whilst he was away.

Uncle continues to live with the Marston Family after John's return. Working at the ranch, Uncle can be seen assisting with blacksmithing and animal tending duties. He and John herd cattle on one occasion and break horses on another. At most other times, he can be seen napping around the ranch.

When U.S. Army soldiers and Bureau agents approach the ranch, Uncle spots them and immediately alerts John, enabling them to mount a defense and plan for the escape of Jack and Abigail.

Uncle assists John in fighting the soldiers, showing great competence with a rifle, but is ultimately wounded in the chest. Jack ceases firing and comes to Uncle's side, while John continues fending off soldiers.

John returns to Uncle and thanks him for his sacrifice, Uncle promptly demands that they escape, and then bleeds to death. Jack expresses horror at Uncle's death.

At some point in time after the assault on the ranch, Uncle is buried atop the ridge at Beecher's Hope, in the family plot. His grave marker provides no birth year and his epitaph reads "Impossible to forget." 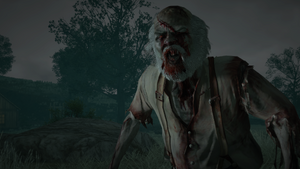 John, after riding through the intense downpour from the storm, comes home at night to find Uncle has not returned from town, with the family assuming he has taken shelter from the storm. Later that night, while John and Abigail are in bed, Uncle bursts in, zombified, snarling and growling. As John tells Uncle "he don't look so good", Abigail sees Uncle's bloodied, torn-up appearance and yelps in horror, putting as much distance between her and Uncle as she can. Uncle slowly approaches John. John then grabs him by the throat and asks what's wrong with him, ending the situation by beating the now undead Uncle over the head with the base of a nearby lamp.

John leaves the bedroom to retrieve his gun, leaving the disgusted Abigail to look at the beaten Uncle lying on the floor. As John is getting a shotgun from his workshop, Uncle chases Abigail out to the front porch. She trips in the yard near the porch, and Uncle takes the opportunity to jump Abigail and bite her on the neck, infecting her. John, arriving to see Uncle had already jumped Abigail, yells at Uncle, causing him to turn and face John. John then proceeds to shoot him in the head, putting Uncle out of his misery. 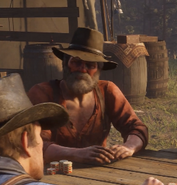 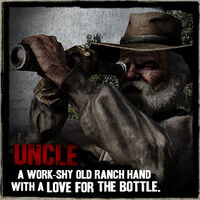 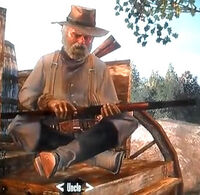 Uncle in the character selection. 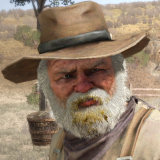 Uncle and John preparing for a last stand

Uncle getting shot during the fight in Beecher's Hope

Uncle's death
Add a photo to this gallery

Uncle biting Abigail.
Add a photo to this gallery

Retrieved from "https://reddead.fandom.com/wiki/Uncle?oldid=353167"
Community content is available under CC-BY-SA unless otherwise noted.