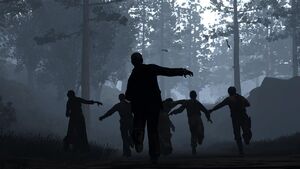 The Undead are enemies found in the Red Dead Redemption Undead Nightmare DLC pack, and also as character models in Multiplayer.

The undead, or zombies as they are more commonly called in popular culture, but only rarely referred to as such in Undead Nightmare are, by definition, a type of living being that has either died and been reanimated by the means of a curse, magic, science, or an infectious virus, or remains living but has lost higher mental functions due to any of the aforementioned reasons. This incarnation of zombie spawned when Abraham Reyes discovered an ancient Aztec Mask under the bull fighting ring in Escalera. He took it, thinking that it would grant him invincibility and immortality, but instead it turned him into one of the Undead as well as resurrected the dead as far as New Austin and West Elizabeth. The Undead will generally swarm and attack the closest living thing they can get their hands on. They seem to be attracted to sound and fast movement as they are quickly able to determine the location of a discharging firearm.

The Undead will rarely attack one another, but there are exceptions. When playing as Zombie Marston during the single player campaign, the Undead will often ignore the player completely, or slowly approach the player in a non-threatening manner, almost as if it was curious. Upon getting in arms reach, they will attack, but wont sprint and give chase if the player attempts to escape. Sprinting around them will quickly draw more attention to the player, so it is recommended to walk when in their direct presence. Any violent action done in their presence will send them into a frenzy and make them attack the player as they did when Marston was alive as a normal human. Interestingly, undead animals such as wolves will often prioritize a living mount over Zombie Marston and will chase it for quite some time, but they will still attack the player if on foot.

The Undead are extremely difficult to kill due to the fact that they are in the limbo between the world of the living and the world of the dead. They can only be killed by destroying or severing the head, burning them with the Torch or War mount, cleansing them with holy water, drowning them, destroying the body itself with an explosive or with the Blunderbuss, or ramming them with the Death mount (causing their heads to explode). They act in a primal, savage manner, feasting on the flesh and blood of the living to try and satisfy their seemingly insatiable hunger. The Undead look rotten and decayed, some having exposed bone sticking out of their sickly green to pale gray skin, others missing eyes, ears, teeth, and even whole pieces of flesh. When an Undead bites a living creature, it becomes "infected" with whatever it is causing the dead to come back to life, having only a few seconds before dying and joining the ranks of the Undead hordes. Some Undead seem to have some recollection of who they once were, saying things they had when were alive, as seen in the case of some Boss Undead while cleansing cemeteries. The things they say, however, are in an eerie, distorted, almost unrecognizable voice. In one case, an undead prostitute can be seen offering her services to an undead male.

However, it seems that if a person is resurrected from the dead while in possession of a bottle of Holy Water (or presumably anything blessed or holy), they will be resurrected with the rotted body of an Undead, but with the soul and mind of who they were, thus meaning that they mentally are that person, as with the case of John Marston. It is unknown if there are any others of Zombie Marston's kind, but it is presumed that there are no others as none have been found, not even in a pastor's grave.

It is implied through conversation with Ayauhteotl that the undead are actually acting on their own accord and do not want to go back to being dead. Thus why the the mask must be returned to prevent them from rising from the grave once more.

There are four different categories of undead found in the DLC, not counting undead animals. 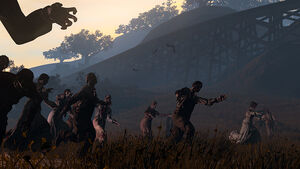 Fresh undead are typical zombies, but are actually quite fast corpses, and they usually make up the bulk of the undead hordes. Along with Bolters, these zombies are the only kind that can grapple John, possibly because they hold no other special characteristics, unlike the other types of undead. They are mostly found in massive hordes, and if they grab the player off guard, the player can be seriously injured or even killed.

These are some notable characters that were turned into undead. 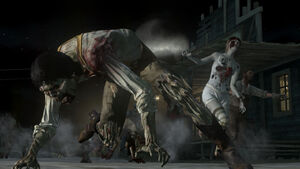 Bolters move much more quickly than other undead by scampering on all fours, making them hard to target. Like Fresh Undead, Bolters can grapple Marston and potentially kill him, although this is much rarer. Their main attack is biting and clawing at the player in a rapid succession, making them extremely dangerous when in hordes. Bolters appear to be small and frail looking, and they walk like they have a limp until they see the player, ironically making them the slowest Zombie as well if they are on just their legs. They are usually easy to spot from a distance. 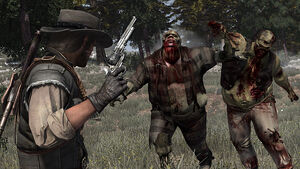 Bruisers are big, fat, and slow, with stamina above other zombie types making them tough to kill. They will also charge at the player from a distance to knock him down. They can easily be seen when within a group of zombies. It is recommended to try and take them out first since they can knock down Marston, quickly making him a meal for any nearby Bolters.

These are some notable characters that were turned into Bruisers: 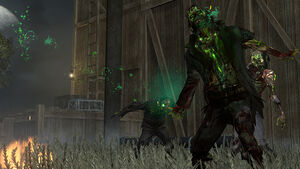 Retchers glow green, smell worse than other undead, spit toxic bile at the player, and explode when killed, causing damage to the player (it will stun the player if playing as undead John Marston) as well as any other Undead or NPCs caught in the blast. They can be found in and around Gaptooth Ridge and most of Nuevo Paraiso.

In Multiplayer, there are eight zombie player models, six of them being recycled Bolter models. They have exactly the same abilities as the normal characters. They also appear as enemy NPCs in the Undead Overrun gamemode.

The player cannot play a zombie character when joining an Undead Overrun gamemode, and it will automatically give the player a random character from the outfitter depending on what the other players' characters are.

Marston being pursued by undead

A pair of Bruisers attack Marston

Something that can scare even the most courageous players