Undead bats can be found all over the map at any time of the day. Occasionally a large group will disperse from a bush or tree when the player fires their gun or gets too close to a group of them. The bats are huge (wingspan approximately six feet) with features similar to that of a pallid bat. Looting them yields Undead Bat Wings. 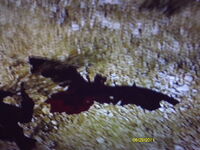