Undead boar is an undead animal featured in Undead Nightmare.

Undead Boars are much like their living counterparts, only less aggressive, meaning that they are less likely to attack without reason. Like all other Undead Animals, one can dispatch an Undead Boar by shooting it in the head.

﻿Undead Boars can be found west of New Austin and south of Tall Trees, they can be also found in Stillwater Creek, and rarely outside MacFarlane's Ranch. Sometimes they can randomly spawn in Tall Trees. Also, they can rarely be seen in Armadillo and Blackwater. 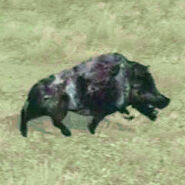 Add a photo to this gallery
Retrieved from "https://reddead.fandom.com/wiki/Undead_Boar?oldid=364673"
Community content is available under CC-BY-SA unless otherwise noted.