Disguised as an Reyes' Rebels

Upon unlocking this outfit, a holy relic is placed in Marston's inventory. When the said relic is used, John's ammunition is replenished and consumable items are added to his inventory. The relic can be used only once per in-game day.

The outfit's name changes to Army of the Undead when the player completes "On a Pale Horse" and finishes the DLC.

Undead Hunter Outfit can be acquired by completing the following requirements:

Army of the Undead outfit, worn by Marston following the DLC's finale 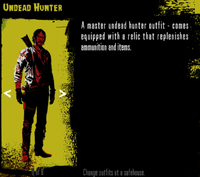