View source
watch 02:00
What is Undead Nightmare?
Do you like this video?
Play Sound

Undead Nightmare is an expansion pack to Red Dead Redemption. The pack features an entirely new single-player campaign that follows John Marston as he tries to find a cure for the highly infectious undead plague that has spread across the frontier. Upon release, the list prices were $15.95 AUS dollars, $9.99 US dollars, £7.99, €9.99 or 800 Microsoft Points. It was released on October 26, 2010.[1]

Undead Nightmare is started by choosing single player in the main menu, after which the options Undead Nightmare and Red Dead Redemption appear (or one can purchase the disc itself).

Seemingly overnight, an Undead plague ravages the once-bountiful frontier, decimating the landscape and reawakening the dead. In towns, settlements, and outposts throughout the world, the uninfected citizens are left to fight for survival against waves of the undead. John Marston must ride out into the vast and terrifying world, and survive long enough to find a cure.

Along the way through frontier towns, deserts, prairies, and mountain passes, John Marston will help survivors, cleanse towns, and put an end to the undead hordes.

The game is set after saving John's family and before his eventual execution, but, obviously, it does not fit into the canon, as many characters (such as Uncle) die multiple times (for example, Uncle is the first zombie encountered and killed by John Marston, though in the original game, he dies in Edgar Ross' attack on the farm). An infectious outbreak of unknown origin amongst those on the frontier is rumoured to be caused by either Seth Briars stealing the glass eye from Tumbleweed, Nigel West Dickens with his miracle tonic, or the Mexicans by bringing the disease over the border from Nuevo Paraíso.

In Undead Nightmare, John is in his house with Abigail and Jack. They are all talking about general things, like a book Jack is reading. However, they mention that Uncle hasn't yet returned from what he was doing. John, however, states that, because of the storm, Uncle has probably gone to a dry place nearby, and will stay there until the storm subsides. Uncle is then seen loitering outside the house.

Later that night, while John and Abigail are asleep, Uncle, revealed to be undead, invades their room and tries to attack them, and John fights back, knocking him out. John heads for his gun in a nearby shed. However, on his way back, Abigail runs out of the house screaming, being quickly pursued by Uncle, who bites her in the neck. John shoots Uncle in the head, ending his suffering, and then tends to Abigail. Jack comes outside and tries to help his mother. However, Abigail becomes aggressive and bites Jack, infecting him. Meanwhile, John runs for his lasso and hogties both of them. After giving them both a plate of food, he gets dressed, leaves them in the house, and sets out to find a cure.

John then goes to Blackwater, where he finds Professor MacDougal, who returned from Yale to document the undead infestation. He claims that he has left his bags with Nastas, and heads down the street to grab them. MacDougal is killed by an infected Nastas however, and John is forced to clear out Blackwater and look for more survivors. He finds a family on a roof, killing undead, but they are no help. John then finds another group of survivors, who all give him multiple theories that they suspect caused the plague, including a "Snake oil merchant" and a "Freak with a glass eye".

If John goes to Tanner's Reach, he will meet a hunter who claims to have just shot a Sasquatch, starting "The Birth of the Conservation Movement" mission, which has John try to hunt down six Sasquatches. After finding the sixth one however, John learns that his hunting has doomed the Sasquatches and the last one there asks John to kill him because his family is dead, whereupon John can choose to kill him or walk away, ending the mission.

If John decides to follow the "Snake Oil Merchant" lead, they will find Nigel West Dickens in Fort Mercer, trying to sell his elixir as a cure and repellent to the plague. However, John forces Nigel to stop selling it, and Nigel complies. He hands out free samples to see if they like it. The elixir however is actually more of a bait to the infected, and one survivor is killed by several undead soon after drinking. A disappointed Nigel and asks John to find him five Desert Sage and five Violet Snowdrop to see if he can make a better cure. He also gives John some of the elixir to use as bait. After John finds the flowers, Nigel makes a phosphorus bullet coating with it, and then asks John to find him some old parts that he needs. After John finds the parts, Nigel gives him a Blunderbuss for it, telling John that it is the ideal weapon for undead killing. He also tells John that he is trying to get to Mexico, and should be in Solomon's Folly in a few days. At Solomon's Folly, John finds out that all paths to Mexico are blocked, and that Nigel has no way of getting to Mexico. However, Nigel tells John that, if he gets a US Army Uniform from some deserters, he can sneak on a train manned by the US Army that is headed to Mexico. Nigel then leaves, leaving his ultimate fate unknown.

If John decides to follow the "Freak with a glass eye" lead, he will find Seth in The Old Bacchus Place, playing cards with an undead Moses Forth. John asks Seth if there's a cure to the plague, and Seth tells him to clear the graveyards. After John clears out three graveyards and goes back to Seth, Seth tells him that the cause of all this has something to do with the Aztecs, and tells him to head down for Mexico if he wants to cure the plague.

At MacFarlane's Ranch, John meets Bonnie MacFarlane, who tasks him with trying to find her father, Drew MacFarlane in the barn, although she tells him he has been in there for more than a day. After entering the barn through a window, John kills several of the trapped undead within. Then, John finds Drew in the barn, zombified. John picks up a nearby Winchester Repeater and is forced to kill Drew. He then returns to Bonnie and tells her what happened, who is deeply saddened by the news.

In Plainview, John finds D.S. MacKenna, who tells John to bring him a Retcher, because MacKenna desires to make a zombie movie. However, once John does so, MacKenna sets it and another undead loose. They then both proceed to attack MacKenna, who is turned undead. John can then kill all three of them.

In Armadillo, John meets Marshal Leigh Johnson, and Johnson asks John to find Eli and Jonah, who have been missing for a few hours. John finds Eli eating Jonah, and they both attack John. John then has to kill them both, and tell Johnson the news, claiming that they both died with their "bellies full". Johnson also gives John Jonah's Sawed-off Shotgun.

In Fort Mercer, John sees an Army Captain posting up a missing persons poster for Millicent Waterbury. The Captain asks John to find the girl, and John finds Millicent in Pleasance House, though undead are trying to attack her. After John saves Millicent, they head back to Fort Mercer and the Captain thanks John, and tells him that there are more missing persons if he wants to help them.

Once John heads to the deserters, he finds them being attacked by undead; he can either help them and earn the uniform, or steal it and suffer the consequences. Once John has the uniform, he can head to the train, where he finds the US Army being lightly hassled by undead. After John helps them clear it out, they head to the border. At the border, the captain tells them all to get off and clear the roadblock. However, they are attacked by undead and the US Army retreats, leaving John to kill the undead. After he has dealt with them, John can man the train and smash through the roadblock into Mexico.

In Mexico, John finds that it is actually in worse shape than the United States, and he heads to Las Hermanas, where he meets the Mother Superior. She tells John that other nuns are not as resourceful as her, and that he needs to head inside Las Hermanas and save the town. After doing so, Mother Superior thanks John, and he asks her why the plague is happening. She tells John that she needs a normal undead to really find out. After John brings her a zombie, Mother Superior tells John that she suspects evil, and she pours Holy Water on the undead, who is briefly bathed in blue flame, but is not killed. She asks John if he can clear out the Sepulcro graveyard for her, and she gives him Holy Water. After he returns, Mother Superior tells him that a woman told her that the cause of all this is because of something Abraham Reyes has done. John is then tasked with heading to Escalera and finding out what happened there.

In Casa Madrugada, John meets Landon Ricketts, who is busy ridding the town of undead. Landon seems to be holding off all the undead by himself, and he tells John that, if he can find something that attracts the undead, he can combine it with Dynamite and really kill the undead quick. After John brings Landon undead bait and Dynamite, Landon combines them and makes Boom Bait. After handing it to John, they part ways.

In Escalera, John finds a woman, who tells him that Abraham Reyes is up ahead. John finds Reyes, though he is now a zombie, and chasing a woman (the same woman that can be seen in almost every cutscene). After John kills Reyes, the woman tells John that the cause of all this is because Reyes' lust for invulnerability made him steal an ancient Aztec mask, which unleashed the plague. They take the mask to the crypt where Reyes found it, and after John places the mask back in the altar, the women reveals herself to be Ayauhteotl, an Aztec goddess. This action causes the undead to be returned to normal, and John heads home to his family.

Upon heading back to Beecher's Hope, John finds that Abigail and Jack are fine, and they are happy again. A few months later, John is dead at the hands of Edgar Ross, and in Escalera, Seth is shown stealing the ancient mask, causing all dead, including John, to return as undead. However, since John was buried with Holy Water, he returns as an undead with a man's soul, allowing him to still be playable.

The Undead Nightmare Collection is a single, stand-alone retail disc or downloadable content that bundles together the following content packs [1]:

The Undead Nightmare Collection was released into retail stores everywhere for $29.99/£24.99/€29.99, on November 23rd 2010 in North America, and November 26th in Europe. It was available via download slightly earlier and at a reduced price [2]. It does not require a copy of Red Dead Redemption to play.

Undead Nightmare received critical acclaim. Its PS3 version currently holds 88 on GameRankings, while the Xbox version holds 87, and both versions hold 87 on Metacritic. Game Revolution gave the DLC -A. The Official Xbox Magazine gave it 9/10, while Game Informer gave it 8/10.

IGN earned the DLC a perfect score of 10/10, the first DLC who got a perfect score, as well one of the only three games published by Rockstar, with the others being Grand Theft Auto IV and V.

Undead Nightmare received the award of the best DLC of 2010 during the 2010 Spike Video Game Awards. As of June 2011 it has sold two million units at retail. 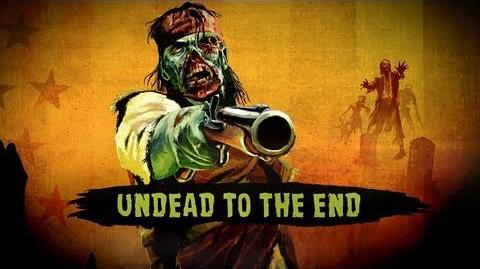