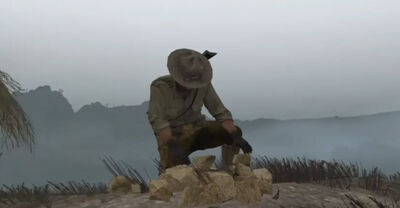 Similar to the Treasure Hunter Challenges in the base game, the player must use Treasure Maps to find secret locations across the land of Undead Nightmare. However, unlike the original game, the player does not receive gold bullion, since there are no shopkeepers to sell it to, but finds rare items such as medicine, chewing tobacco, moonshine and plenty of ammunition for any weapons.

In order to start this challenge, the player character must obtain the first treasure map from a random event. After finding a man sitting at a campsite or a doctor using a Gatling to kill the undead, look for a chest next to them and open it up to get the first treasure map. Note that this action may turn the NPC hostile. Opening the doctor's chest after completing his request for a live undead will avoid this. Additionally, the campsites where a man is either eating undead or has his undead wife tied up, all have treasure chests and the treasure map should be located inside one of the chests.

Alternately, a random event at Tanner's Reach occurs where a survivor is shooting some very slow moving undead. Once the survivor has finished this task, they will warn the player character not to go into the cabin, which is full of undead. Clear them out and within the cabin there will be two chests, one from the original Red Dead Redemption campaign, which cannot be opened, and another chest against the opposite wall. Inside this chest the player may receive the treasure map.

Finally, the first map can also be obtained from a chest at Silent Stead after certain conditions are met. This avoids hostile confrontations with an NPC althogether, but requires the player character to clear Silent Stead of the undead. 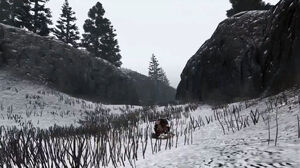 Northwest of Hennigan's Stead and North of Pike's Basin, the area itself is outside of the map, in the snowy area of New Austin just north of the long railway tunnel. On the map, it's the area that runs into a dead end. It is relatively well hidden, located to the left of the large pile of rocks. For those finding difficulty with getting to the location, the easiest way is to follow the railroad westwards until it runs into the tunnel, and then ride your horse northwards over the tunnel.

Rank 1 Treasure Map
Add a photo to this gallery 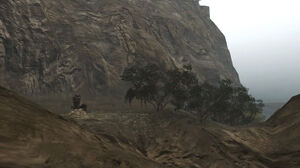 Southeast of Coot's Chapel and Northeast of Lake Don Julio. The picture on the map shows the ridge south of Mescalero as it is seen from Venter's Place. The cliffs are visible on the game map. Approach the cliffs from the West, and ride eastwards until you see the pair of trees on the top of the cliffs adjacent to the cliffs you are on. The treasure is more or less directly beneath these trees.

Rank 2 Treasure Map
Add a photo to this gallery 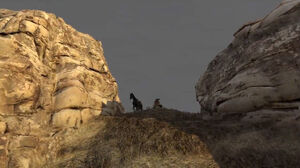 Northwest of The Scratching Post, the treasure is at the top of the mesa that overlooks the post, between the two rock formations.

Rank 3 Treasure Map
Add a photo to this gallery 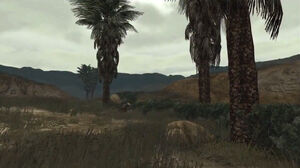 South of Sepulcro, in the middle of where three palm trees are located.

Rank 4 Treasure Map
Add a photo to this gallery 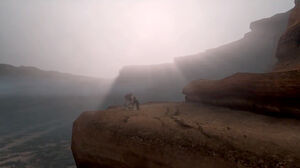 Between Casa Madrugada and Agave Viejo, the treasure is on the slippery mountain, at the end of the path. These cliffs are annoyingly hard to scale; a viable option is to locate the ridge that the treasure is on (from beneath) and ride westwards until you find a part of the hill that isn't so steep, and charge up it with your horse.

Rank 5 Treasure Map
Add a photo to this gallery
Start from the path that leads up the hill and you'll easily traverse along the upper edge. You may slip once or twice, but you can easily recover without falling down to the lower ledge. Be aware if you unmount your horse, he may likely follow you across to the treasure location. Whether on horse or on foot; getting to and back is easiest when starting from the trail leading to the Predident's Palace.

Completion of Undead Treasure Hunter Challenges contributes towards the acquisition of the following Trophies/Achievements:

Retrieved from "https://reddead.fandom.com/wiki/Undead_Treasure_Hunter?oldid=324933"
Community content is available under CC-BY-SA unless otherwise noted.