Undead bears are beasts infected with the undead plague that hit the setting of Red Dead Redemption, and can be found only in Undead Nightmare. As with all undead animals, an undead bear's body and fur are mangled by scars and blood, and may show some skeletal features.

Being an undead creature, an undead bear is invulnerable to the majority of injuries and weapons, but can be instantly killed through headshots. It might run away at the sight of a torch.

Like their normal counterparts, Undead Bears can appear out of nowhere, and can kill you instantly. Take the same precautions as before, as they are not to be taken lightly, and use Dead-Eye Targeting to get a direct headshot. Fortunately, any weapon can kill the Undead Bear, thus making it easier to kill than the normal, but only if you see it first.

When killing Undead Bear with a Torch, a good strategy is to stand still while on horseback with any Undead Horse, and let the bear approach the player then whack it while it's attacking. Be aware that if the bear attacks the player from behind, it maybe possible that the bear will hit the player instead of the horse. If the Undead Bear starts to run off follow it and continue with this tactic until the Undead Bear is deceased. However, when using the horse Death, take care to avoid running into the Undead Bear directly or it will die because of Death's special ability, and the player will not receive credit for a Torch kill.

Furthermore, Undead Bears also move slightly faster so stay alert. It should also be noted that they are more likely to appear during the day as they can be found in abundance between 7-10am near the ridge surrounding Pacific Union Railroad Camp. Because it takes time to Torch an Undead Bear, another one will often spawn and join the attack.

A close-up of an Undead Bear.

Marston facing off against an Undead Bear. 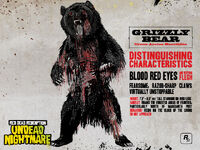