Unicorn is a horse breed and a mythical creature found in the Undead Nightmare DLC for Red Dead Redemption.

The Unicorn seems to be a mythical version of the Hungarian Half-bred horse with the addition of a horn and cloven hooves. Occasionally, the cloven hooves will appear as normal hooves.

It also has a permanent halo of butterflies and leaves a rainbow trail in its wake as it gallops. It has unlimited stamina, and it is extremely tough. It can take an almost endless amount of shots to the side or even cannon fire, however, it dies when shot in the head or after falling from a high cliff.

The Unicorn can be located in the fields northwest of Torquemada, directly underneath the map image of three horses, after the player has killed the Chupacabra and completed all of the Four Horses of the Apocalypse challenges. The Chupacabra can be killed after you have completed the first four Undead Hunter Challenges. While searching for the Unicorn, the player will not be alerted of its location with the blue circle and the mythical creature message, because of this the player will have to find the Unicorn in the fields by themselves.

Once all prerequisites are met, the Unicorn will appear in the area. 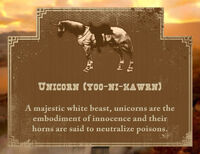 The description of the mythical Unicorn in-game.

A pair of Unicorns in Armadillo. 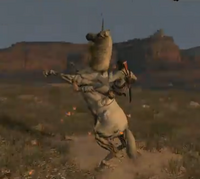 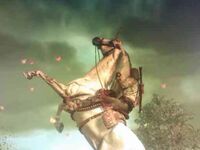 Look closely and you can see the butterflies in the background.

Finding and breaking a Unicorn will contribute to the acquisition of the following Trophies/Achievements:

Retrieved from "https://reddead.fandom.com/wiki/Unicorn?oldid=373802"
Community content is available under CC-BY-SA unless otherwise noted.