The modern-day Army has its roots in the Continental Army, which was formed on June 14th 1775, before the establishment of the independent United States, to meet the demands of the American Revolutionary War. Congress created the official United States Army on 14th June, 1784, after the end of the war to replace the disbanded Continental Army. The Army considers itself to be descended from the Continental Army, and thus dates its inception from the origins of that force. It is known that Bill Williamson was in the U.S. Army for a time, and that he was involved in a conflict with the Indians, before being dishonorably discharged in December 1892 for deviancy and attempted murder. Aside from this, the U.S. Army are also known to have killed the wife and first son of Rains Fall.

The U.S. Army serves as a minor, antagonistic faction throughout most of the game, and is almost exclusively encountered in Fort Wallace or the surrounding areas. Just prior to the events of the game, the Spanish-American War was fought and won, and soon after the game begins, the Philippine-American War was declared.[1]

The Army is first seen when Eagle Flies rides into camp requesting help in retrieving the Wapiti Indians' horses that were confiscated by the Army. Seeing this as a good way to divert the Government's attention away from the gang, Dutch agrees and brings Arthur and Charles to help. Soon afterward, Dutch and Eagle Flies formulate a plan to trap some soldiers in order to tar and feather them. However, due to the unexpectedly large amount, it fails, resulting in Eagle Flies' capture, along with Dutch and Arthur only narrowly escaping after being cornered.

Arthur can also choose to help Rains Fall in certain endeavors. He steals a Chanunpa that was confiscated by the Army and brings it back to Rains Fall. He can also help Captain Monroe, and steal some vaccines from the Army that were being purposely withheld by the U.S. Army. Eventually, Colonel Favours calls for negotiations between him and Rains Fall, but they are unsuccessful, as Favours is unwilling to give in, and says that the Indians are “little more than criminals”. Not only this, but he also tries to have Captain Monroe hanged for treason, although the Captain is rescued by Arthur and Charles.

Later on, Arthur and Charles decide to try and rescue Eagle Flies, who has been imprisoned in Fort Wallace. After scaling the back wall and stealthily killing some guards, they manage to rescue Eagle Flies from his cell. The trio make their escape while being pursued by U.S. Army soldiers, and eventually outrun them by canoeing to safety.

Afterwards, in the mission "My Last Boy", a number of soldiers from Fort Wallace, under command of Colonel Favours, engage in battle against the Wapiti Indians, led by Eagle Flies, in order to defend Cornwall Kerosene & Tar. Alhough the soldiers had killed several Indians and nearly defeated them, the arrival of the Van der Linde gang successfully turned the tide of battle. The gang and remaining Indians assaulted on two fronts. Dutch led most of the gang members to attack the warehouse, while Arthur led the Indians, Charles, and Sadie to rescue Eagle Flies. After a short but fierce battle, almost all defending soldiers, including Colonel Favours, were killed.

The American Army is seen for a final time during the train robbery undertaken by the gang. They are seen defending the train from the attacking gang members. One soldier notably shoots John Marston in the shoulder during the robbery, leading to him being abandoned by the others. After the gang seizes control of the train, Army reinforcements are sent to chase after the train, but are unsuccessful, as most are gunned down by a Maxim gun.

The Army is also encountered in "Money Lending and Other Sins VI", where Leopold Strauss asks Arthur to collect a debt from J. John Weathers, a soldier who deserted and ran off with his Native American lover. Arthur tracks Weathers down only to be told that he is destitute. Immediately after, a number of soldiers arrive to kill Weathers for his desertion, resulting in Arthur being forced to step in and protect him. Weathers offers Arthur a silver locket to pay off the debt, to which Arthur can respond by accepting it or absolving the debt altogether.

Like in story mode, the Army is almost exclusively encountered in Fort Wallace, and is rarely encountered outside the fort. Samson Finch and his partner are former soldiers. After the latter's betrayal, Samson hires the protagonist (Low Honor required) to find and kill him when he decides to hide with their old regiment at Fort Wallace and to sabotage the regiment's chances of robbing a bank Samson is targeting by destroying the fort's ammo dump.

Criminal gangs made up of Army deserters can also be encountered during bounty hunting and free roam.

U.S. Army soldiers fight alongside Marston in the hunt for Dutch van der Linde at Camp Cochinay, near Tall Trees. During the mission "And The Truth Will Set You Free", if John rides in front of the column of U.S. soldiers, the captain in charge of the soldiers will imply that the Bureau of Investigation is forcing the men to cooperate, similar to Marston's situation.

After the assault on Cochinay, the U.S. Army is not seen until the mission "The Last Enemy That Shall Be Destroyed", where they attack Beecher's Hope. During the battle, Uncle is slain, eventually followed by John Marston himself, who is killed by a large firing squad, which is mainly comprised of U.S. Army soldiers

The U.S. Army is encountered during the mission "American Imperialism", in which John can help some deserters defend the Scratching Post from the undead, or steal a uniform from their camp. After acquiring a uniform, he joins a team of soldiers in a train heading to Nuevo Paraíso, but on the way, are ambushed by a large horde of undead while trying to clear a roadblock and are forced to retreat, leaving John alone with the undead.

They are also seen in the mission "Missing Souls", when the U.S. Army captain that helps Marston in the assault on Cochinay is seen putting a poster of a missing person. The U.S. Army can also be seen guarding the survivors in Fort Mercer.

The flag of the United States Army in 1911 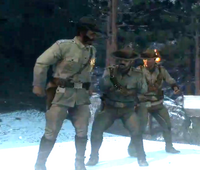 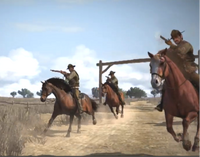 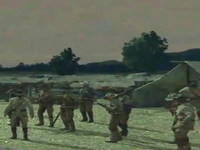 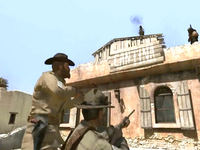 A battle on the building

John Marston as a soldier in Undead Nightmare

A soldier in Red Dead Revolver

US Army soldier and officer in Red Dead Redemption 2

Retrieved from "https://reddead.fandom.com/wiki/United_States_Army?oldid=414885"
Community content is available under CC-BY-SA unless otherwise noted.