Urban Pleasures is a mission in Red Dead Redemption 2.

After receiving a tip from Angelo Bronte about a trolley station in Saint Denis holding a large amount of cash, Dutch, Arthur and Lenny meet to rob it.

Arthur meets Dutch and Lenny in an alley across from the trolley station. The trio put on their bandanas and enter the station, announcing the robbery. Arthur robs three people, and after the clerk opens the door to the safe, Arthur loots it. However, he only finds a few dollars, and Lenny states that there are a large number of armed police outside.

Realizing they'd been set up by Bronte, the pair quickly make an escape plan, and board a trolley as it's moving. They gun down a multitude of police before Dutch tells Arthur to slow down the trolley. Arthur attempts to decrease its speed, but the brakes malfunction and the trolley goes off the rails, crashing on its side in the street.

Shaken, the three fight off more police and make their way through the streets until they come across a wagon. With Lenny driving, Dutch and Arthur kill all of the pursuing lawmen until they eventually escape Saint Denis. The money is split, with Arthur remarking that the three of them each get $15 and a quarter. Lenny then leaves to take Dutch back to camp. 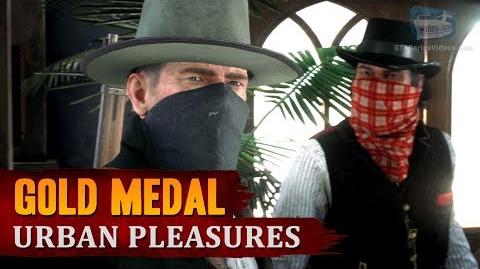