–Uriah Tollets, regarding the opium trade

Uriah Tollets is a minor character and a Stranger featured in Red Dead Redemption. He appears in and gives the player the Stranger side-mission "Poppycock".

Tollets is an older man who an immigrant to Mexico. He operates out of the Mayor's Office in Chuparosa as a distributor in an opium-smuggling ring. He looks down on Mexico and its inhabitants despite having immigrated there and refers to them derogatorily as "dagos", which is a disparaging epithet (the term primarily referred to Italian-Americans, although it soon became a catchall term for anyone of Southern Europe/Hispanic descent in the United States).

Marston is approached by Tollets in Chuparosa. He offers payment if Marston is to successfully deliver a package to a Juan de la Vara in El Matadero. Tollets has information that the package can be found at the docks in the Rebel encampment of Nosalida.

Marston undertakes this task, and upon delivery, is surprised at the astonishing amount of $1,000 being paid for the package. The foreman is appreciative but reveals little else.

When Marston returns to Tollets in Chuparosa to return the payment. Marston is disappointed to discover the package was opium, and he has inadvertently helped supply indentured workers with an addictive narcotic. Tollets tells Marston how opium is necessary to help the railroad workers cope with stress and loneliness. He walks to the corner of the room and starts to smoke opium while Marston makes his decision.

Marston can kill Uriah Tollets in retaliation, keeping the profits for himself. If the player chooses to let Tollets live, Marston returns the $1000 and states he wants nothing further to do with Tollet's operation. Marston can then kill him anyway if he chooses and loot the $1000 of his corpse, plus whatever else he was carrying. 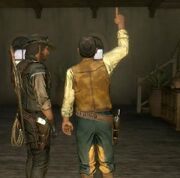 "This land was imagined by an angry God for an angry people." 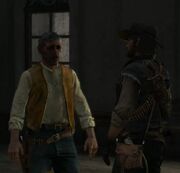 Retrieved from "https://reddead.fandom.com/wiki/Uriah_Tollets?oldid=397822"
Community content is available under CC-BY-SA unless otherwise noted.