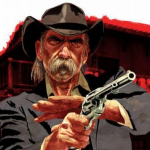 John Ricketts was born in 1878 in New Austin, life was good for him at that time, living with his father and mother like every family, but when he was around 6 years old, his father got killed in Tumbleweed during a saloon fight. Then his uncle Landon Ricketts himself raised him when he could. Due to this John had a dream in mind : Be just like his uncle when he will be an adult.

Many years passed and John met the wrong people and began to be an outlaw instead of being a decent gunslinger.

In 1897, John was arrested in Blackwater for a murder he did not commit. He then stayed several months in the Sisika Penitentiary.

In 1898, he managed to escape Sisika with the help of the widow of the man who was killed in Blackwater named Jessica LeClerk. He then began to help her in the task of finding the man who killed her husband.

By now John works as bounty hunter and even became a well-known one. He started to work for a collector called Madam Nazar as a collector for her. He also started a trading business with JB Cripps.

Months later, Cripps sends a letter to John telling him he talked to one of his old friends about John, a famous Moonshiner called Maggie Fike. He also tells John to meet her in Emerald Ranch to start a Moonshining Business, which John accepted and bought a Moonshine Shack in The Heartlands.

The scar on his left cheek is the result of a fight between him and another prisoner who tried to stab him with a handmade knife.

Retrieved from "https://reddead.fandom.com/wiki/User:Ricketts_Landon?oldid=386386"
Community content is available under CC-BY-SA unless otherwise noted.