Welcome cowboys and cowgirls to the first Monthly News blog on the Wiki (January)! A new edition will come out every month on the first Friday, the purpose of this blog is to every month discuss what news and events have taken place during the previous month. That includes but are not limited to; leaks, official news, speculation, analysis, etc. As part of the upcoming release of Red Dead Redemption II I will mainly focus on Red Dead Redemption II specific content. Mainly leaks and official news. The readers will also be able to join the blog by answering polls and discussing with others in the comments.

What has been going down so far

In January in the Red Dead Community we've seen continued analysis of the official screenshots Rockstar released last week on February 1st. Note that most of the analysis made are made by the community, mostly from forums like the GTA-Forums. Another thing to note is also that much of the analysis is connected with the leaked map from last year. Seen on the right.

The map has proved to actually be a very reliable source since the Red Dead community has been able to connect certain screenshots and scenes from trailers to specific areas on the map. Feel free to scroll through the slideshow in the bottom right to see a collection of many of the connections that has been made by using the map.

Even though it is not officially certified to be legit it really does seem very trustworthy, most of the screenshots the community has been able to connect to the leaked map and the depth in their analysis just keep surprising us.

With the back story complete let's jump into the major events that has been going down this particular month:

Further analysis of sections in the 2nd trailer

On the GTA Forums there has been an increased interest in further analyzing the locations seen in the second trailer. Particularly mapping the town present in the trailer, I'll let the images below speak for themselves: 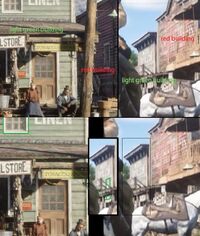 As you can see, the amount of far fetched mapping is insane. But their work has also led to an increased understanding in how the game will look in particular areas. It's really amazing that they have been able to accomplish this by solely watching the second trailer. Amazing.

Different views from the trailer can be united to get a better view over where it takes place and how the layout of the town looks.

However some inconsistencies can be found, for example the light green building seen in an official screenshot and later seen in the second trailer has shifted its appearance and it's not certain that it even is the same building, what do you think? Image on the right.

Analysis of official screenshots from the last month

Another hot topic in January has been the official screenshots from last week. While the screenshots don't tell us that much some details can be found in them. 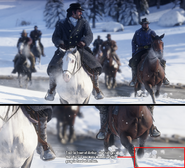 This was the main events of January, I'll be back next month and I will try to keep the blog fresh by implementing new additions like polls and speculation. The next blog comes next on Friday, March 2nd. See you then!