Valentine is a settlement in Red Dead Redemption 2 and Red Dead Online in The Heartlands region of the New Hanover territory.

Valentine is a livestock town, a short ride away from the Horseshoe Overlook camp; the first camp the gang makes after their exodus from the frigid mountains.

Several suppliers and businesses can be found within the town including two saloons, a butcher, a doctor, a general store, a gunsmith, a newspaper stand, a stable, and a hotel.

Northwest of the train station are livestock yards, housing various pens and an auction yard. Across the street to the west is the theater; a tent with a small booth to the right of the entrance where the player can purchase tickets to view a movie inside. Just outside of the theater is a camping site, with a number of tents, wagons, and two campfires. The player may cook on the campfires and even take from the camp's stew pot as they wish. Facing the theater are gallows, where criminals who have been sentenced to death are hanged. Sometimes, executions can be witnessed here, with a gathered crowd to watch. 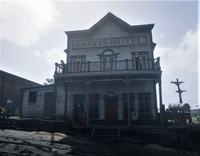 Adjacent to the stable is a building under construction, where builders can be seen carrying and hammering down planks of wood. By 1907, this building is complete with red wooden paneling and a grey, tiled roof. Facing this construction site is the Saints Hotel, where the player can rent a room to bathe, change their clothing, and sleep to refill their cores or to simply pass time.

Across the adjacent street to the Sheriff's office is Valentine Church; a tall, white, wooden building surrounded by graves. To the south of the church is the second tavern in Valentine, Keane's Saloon. Here, the player can consume alcoholic beverages, eat hot meals to refill their cores, or try their luck in a game of Five Finger Fillet.

The cigarette card for Valentine

Arthur Morgan ordering the bank manager by gunpoint to open the vault.

Arthur Morgan holding up the bank in the town of Valentine.

Valentine seen from the northeastern direction