Vampire (also known as the Saint Denis Vampire) is a minor character and an Easter egg featured in Red Dead Redemption 2.

In order to find the Vampire, the player must find five pieces of mysterious writing that line the walls of Saint Denis. These can be found and inspected in any order by the player, after which the protagonist jots down the text and location in their journal.

The vampire is a mysterious being living in the city of Saint Denis. He claims that he is several centuries old. The newspapers imply that he killed five people and wrote the messages where the victims died.

After discovering all five writings, the player receives a mark on their map in the form of a crude pentagram comprised from the locations of the writings which will point to the location of the vampire - an alley south of the cathedral, just opposite the general store - in which the vampire is located. The vampire can only be encountered around midnight (12:00 AM to 1:00 AM).

Upon entering the alley, the player will find the vampire drinking blood from his sixth victim. The vampire appears to be surprised that somebody has found him, but is hostile nonetheless; it proceeds to threaten the player, warning them that he may do to them what he did to the corpse beside him if they do not leave.

If the player either antagonizes the vampire or stays within his vicinity, he will attack the player with his dagger and kill them instantly if he successfully lands a hit. After killing him, his dagger can be looted from him, in addition to one Stringy Meat and two Bat Wings.

The vampire is shown to be a murderous, bloodthirsty and violent being, threatening to kill the player upon being confronted, soon after killing somebody else.

The vampire is a tall, emaciated-looking bald man with deathly pale skin, pointed ears resembling those of a bat, long fingers ending in pointed nails and a withered mouth filled with a pair of sharp canine teeth, forming a set of fangs. He wears a black overcoat with notched collar lapels, red sleeve gauntlets, red buttons, and red frog fasteners. He also wears fitting black pants and black dress shoes. A dark blue dress shirt is visible underneath the coat. 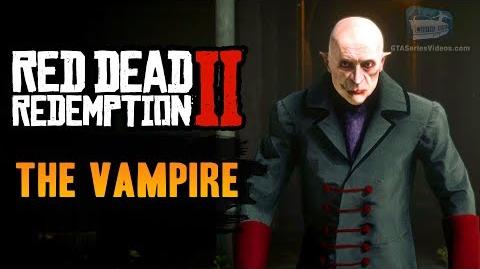 Retrieved from "https://reddead.fandom.com/wiki/Vampire?oldid=399463"
Community content is available under CC-BY-SA unless otherwise noted.