It is a small ranch northwest of Lake Don Julio. The ranch is smaller than most ranches, including Critchley's Ranch.

This is the location of Grover Boone, the fourth missing person to be rescued in the Fort Mercer segment of the Missing Souls Side-missions. The ranch located here also serves as a clue for the Undead Treasure Hunter challenge Rank 2.

After downloading the Liars and Cheats DLC pack, Venter's Place becomes a gang hideout in Free Roam. As with the other hideouts from that DLC, upon completion the player with the highest score unlocks a chest containing the Explosive Rifle.

The ranch serves as a Del Lobo outpost, housing three gang members. If the player visits the house for the first time a random encounter will be triggered where Del Lobos are having a party only to be robbed afterwards by a prostitute which can alternatively be robbed by the player after she leaves the house.

The whole ranch has a fence running around it in a circle; the ranch consists of two main buildings: a farmhouse and a barn. A single man wanders the ranch, this man is either "Mr. Venter" or a ranch hand. He is most likely a ranch hand as a small mattress can be found in the barn, which would usually be slept in by a ranch hand.

The ground on the ranch is dotted with large stones, rocks and pebbles. A wheelbarrow is placed next to the barn.

The ranch has two horses and four chickens. The ranch is also home to a scrawny brown ranch dog, the same breed and model of the dog at Critchley's Ranch. 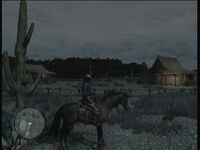 A posse in Venter's Place.

Venter's Place from the west

Venter's Place from the south

Venter's Place from the east

Venter's Place from the north

Rescuing the missing person at this location contributes toward the following Achievement/Trophy: