Nothing is known of Vernon's background. However, though he appears to be a ranch hand and cowboy, it is revealed in the mission "On Shaky's Ground" that he has some involvement in criminal activities. Vernon has a relative, Harrison Cherry, buried in Blackwater cemetery.

Vernon plays a minor role in the mission "On Shaky's Ground", in which he is seen as one of the bandits interrogating Shaky. After John Marston breaks into the warehouse, Vernon can be shot dead or hogtied.

Vernon can usually be encountered in Blackwater and Manzanita Post, where he rides horses, or does a variety of odd jobs. However, he has been known to frequent multiple locations throughout West Elizabeth and New Austin.

Vernon in "On Shaky's Ground". 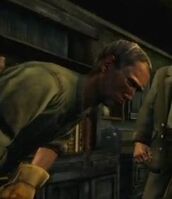 A closer view of Vernon Cherry in "On Shaky's Ground".
Add a photo to this gallery

Retrieved from "https://reddead.fandom.com/wiki/Vernon_Cherry?oldid=378129"
Community content is available under CC-BY-SA unless otherwise noted.