Victor is a rebel fighting for Abraham Reyes. He is one of the most prominent rebels in the game and appears in multiple missions in both minor and supporting roles.

Victor is first encountered after John Marston rescues Abraham Reyes from his execution. He meets Marston as soon as they leave El Presidio. He leads John and Abraham to the docks where Luisa Fortuna is waiting.

Victor is seen again discussing a tactic with Abraham Reyes at the Rebel camp at Agave Viejo before Reyes and Marston leave.

He is then encountered leading the rebels along with Marston to take down Captain De Santa at Sepulcro; he and his men assist John in killing De Santa's soldiers, and he then tells John that De Santa is running away while they are still fighting. John recovers De Santa and beats him to hear the location of Javier Escuella. When finished, he and the other rebels will kill De Santa if the player decides to spare him. John and the rebels then ride to Casa Madrugada where De Santa told them Javier Escuella would be. It turns out to be an army trap. They hold out against the attacks and eventually succeed.

He is last 'officially seen' after Reyes and Marston kill Bill Williamson and Colonel Agustin Allende. Outside of these missions, Victor can be encountered in Agave Viejo where he usually stands by the main entrance. He can also be encountered in Escalera after “An Appointed Time”.

In Undead Nightmare, despite his involvement in the rebel movement and his belief that he was helping the Mexican people, Victor can commonly be seen attempting to rob survivors of their supplies out of desperation. He can be allowed to go through with his robbery, which usually ends in him murdering his victim. However, if the player chooses, he can be hogtied, disarmed or killed in order to stop his robbery.

He can also be seen as the survivor leader in Nosalida, where he will be standing at the end of one of the docks, fending off the Undead despite an ammo shortage. After the town has been cleared, he may be found sitting around a campfire with Rosario Landeros. He can be heard sarcastically noting that the reign of Abraham Reyes has not got off to a good start. Sometimes he can also be seen in Wilderness shooting at a horde of Undead, if the player goes to him he will say Hey friend, you're back, eh?! I will bet you some supplies, you cannot kill more undead than me. The player has a choice to bet 20 sniper rifle rounds or to decline his offer. He will then try to kill the undead himself. 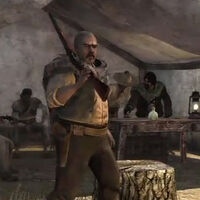 Victor and Chico Renovales sneak up on a Mexican soldier in the mission "Civilization, at any Price".

Victor bludgeons a Mexican soldier while storming "The Gates of El Presidio". 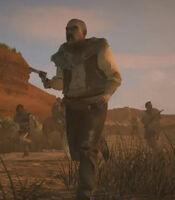 Victor in action.
Add a photo to this gallery

Retrieved from "https://reddead.fandom.com/wiki/Victor_Melendez?oldid=383275"
Community content is available under CC-BY-SA unless otherwise noted.