Victor is a member of the Federales.

Victor can most often be found in Chuparosa, outside the Mayor's Office. However, if Marston has a bounty, Victor will become hostile and attack him.

Victor can also be found in a random encounter in which his prison transport is attacked and two criminals have broken loose. He will then ask the player to catch or kill the criminals. He can also be killed but this will result in negative honor.

During the Undead Nightmare, Victor can be seen defending Tesoro Azul along with Julian Coronado and Selestino Herrada, and can sometimes be seen in a random encounter outside certain Nuevo Paraiso towns being attacked by an undead. The player can choose to step in and save him, receiving his thanks and allowing him to go about his business, or allow him to be killed.

Once Tesoro Azul is saved, Victor will stand smoking outside of a building, while the other two will stand around outside the church talking, possibly showing that even in the midst of an undead uprising, Ortega and the outlaws are still unable to fully get over their differences. 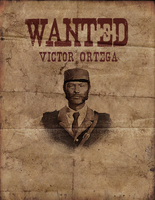