Captain in the Mexican Army

With the addition of the Myths and Mavericks DLC pack, De Santa is also a multiplayer character model that may be selected in the "Revolution" section of the Outfitter.

De Santa is a captain in the Mexican Army, serving under Colonel Agustin Allende. He was born sometime in 1877.

De Santa works alongside John Marston after his first visit to Escalera, sending him on various tasks, oftentimes personally helping John do these tasks. John grows to dislike him, seeing how most of the tasks involve burning down innocent people's homes and capturing young women to give to Allende and the other soldiers. John also obviously hates the idea of a dictatorship, seeing how he fought against governmental control. De Santa tries having John killed a few times, sending John on many missions with incompetent soldiers against large armies of rebels, most notably in the mission “Mexican Caesar” where he sends John and Espinoza on a suspected suicide mission, hoping the two would not come back alive.

Eventually, De Santa betrays John by claiming that the Mexican Army has captured Javier Escuella and Bill Williamson, and insists they are being held in the church at Chuparosa. However, upon reaching said church, John is knocked unconscious by a rifle butt to the head. Upon coming to, he is on the ground, his hands tied behind his back. As he is about to be executed, a lone bullet, fired by Abraham Reyes, whizzes through the air and prevents a seemingly imminent death. In the confusion, a large group of rebels attack, covering John's escape. Rushing over to Reyes, John has the ropes binding his wrists cut, and hurries back to get his weapons. Unfortunately for Marston and the rebels, De Santa manages to escape.

In the Luisa Fortuna mission, "Captain De Santa's Downfall", Luisa explains that De Santa was sent to oversee a massacre in Sepulcro. She asks Marston to ride out with a group of rebels and finish him once and for all. John and the rebels quickly dispatch all the Mexican Army soldiers before De Santa is continually beaten. Under intense interrogation, the brutalized De Santa tells John that Javier Escuella is hiding at Casa Madrugada. In the end, the player is given the choice whether to kill the captain themselves, or to walk away and allow the rebels to open fire on him.

Captain De Santa's information about Casa Madrugada turns out to be a final lie, as only an ambush of Mexican soldiers awaits Marston.

De Santa's grave is to the far left of Sepulcro when the player enters from the side facing Las Hermanas.

During the mission "Mother Superior Blues", the player will be asked to clear out Sepulcro. Once the coffins have been burned and most of the Undead cleared out, De Santa will emerge from his grave. As he rises, he will mumble, "Mexico loves you, Mr. Marston," in an eerily distorted voice. The player must kill or otherwise disable the Captain to complete the cemetery; you can either kill or hogtie him.

Ambitious and unprincipled, De Santa knows that he is fighting a war, and he has to win as the rebels have placed a price on his head. He will do anything for the Army and kill anyone that tries to stop him.

De Santa is portrayed as a cruel, abusive, and sadistic man. Regularly, he has personally participated in the slaughter of civilians that support the rebels and has willingly kidnapped women to satisfy the sexual appetite of his commander, Colonel Allende. He is also a vicious sycophant, who is not above sending competitors on suicide missions for personal gain; he even makes a man dig his own grave before shooting him. Despite Allende's abuse or perhaps because of it, De Santa seems to genuinely admire and look up to Allende, seeing him as a savior of the Mexican way of life. It is implied that De Santa is in a homosexual relationship with Quique Montemayor, as in several missions he is seen taking prolonged looks at the waiter, and can be seen with his arms around him later in the game. Furthermore, it is implied he has feelings for the owner of the gunsmith in Escalera, who says that De Santa is often kissing him "as if I were his brother" (in Spanish). It is also likely that De Santa's romantic preferences are known to others, as during the mission "Must a Savior Die?", when Marston tells Abraham Reyes he's "after two men", Reyes responds with, "You have been spending too much time with Captain De Santa." 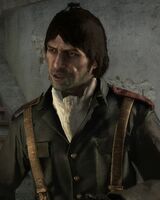 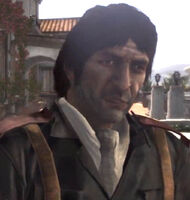 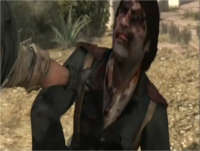 De Santa after being beaten by John Marston.