Nothing is known of Virgil's background, although, judging by his attire, he seems to be fairly well-to-do.

Virgil can most often be found around Blackwater, loitering around the movie theater as well as the train station. On rare occasions, he can be seen taking part in a petty criminal act such as horse theft. 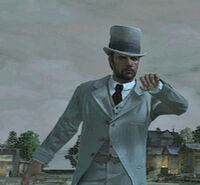 Virgil Scoggins in mid-stride, strolling down the avenue in Blackwater. 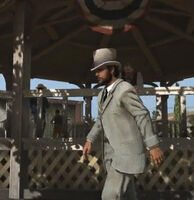 Retrieved from "https://reddead.fandom.com/wiki/Virgil_Scoggins?oldid=368953"
Community content is available under CC-BY-SA unless otherwise noted.