Arthur and Sadie row to Sisika Island to break John out of prison.

When arriving at Copperhead Landing, Abigail asks Arthur and Sadie if she could join them in rescuing John, but they refuse, saying that she would just become another thing to worry about. She reluctantly agrees, and thanks them both. Arthur and Sadie get into the rowboat and head towards the island.

Once they arrive, Sadie tells Arthur to take out the prison guard in the watchtower. After the guard is taken out, Arthur will snipe out the prison guards near the barn. After killing them, Sadie will exclaim that she didn't think that was actually John. Arthur and Sadie will head towards the field to the downed guards. Sadie interrogates a wounded guard, but a prison guard named Milliken appears and orders her to drop her weapon. Arthur sneaks behind the guard and orders him to drop his weapon. Arthur will use the guard as a hostage and Sadie will knock out the other guards as Arthur is heading towards the prison. Arthur demands that the guards release John from the prison or he will kill Milliken. The guards will eventually release John so, in response, Arthur releases Milliken, and the guards in the prison will open fire on the group.

Arthur, John, and Sadie fight their way to the boat and eventually escape the island. The trio then heads back to the camp, while Arthur informs John what had happened in his absence and that Dutch did not want him to be rescued. After arriving at the camp, Dutch is not pleased to see John. Dutch claims he had a plan and says the law will now be on all of them, to hang them all, instead of just John. 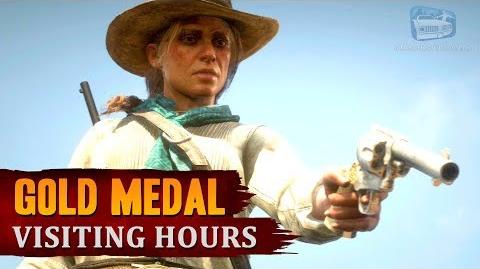 Retrieved from "https://reddead.fandom.com/wiki/Visiting_Hours?oldid=414327"
Community content is available under CC-BY-SA unless otherwise noted.