Members of the Murfree Brood

Walt Murfree is a member of the Murfree Brood, a family of inbred killers. Walt may be considered intelligent on Murfree standards, displaying literacy, albeit poorly.

Walt Murfree is never knowingly encountered by the player, but is mentioned in a ransom note he wrote demanding supplies in exchange for the release of a mother who the Murfrees kidnapped. 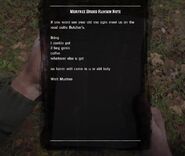 A note found on a corpse displaying his ransom note