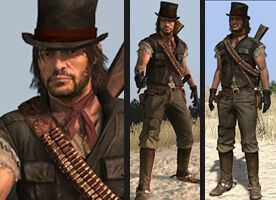 Walton's Gang Outfit is an outfit available in Red Dead Redemption, initially exclusive to the PlayStation 3 version of the game. As of October 2011, Xbox 360 players have access to the outfit by purchasing the GOTY edition of the game.

This outfit allows Marston to pass as a member of Walton's Gang. When this outfit is worn, Marston can enter Walton's Gang hideouts without being attacked (until he initiates an attack). This outfit consists of Marston's trademark cutoff vest with what appears to be his tan button-up shirt with the sleeves cut off, along with a top hat and a pair of olive green pants tucked into his standard boots.

Six Scraps must be obtained to complete the outfit. 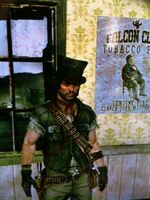 Retrieved from "https://reddead.fandom.com/wiki/Walton%27s_Gang_Outfit?oldid=308368"
Community content is available under CC-BY-SA unless otherwise noted.