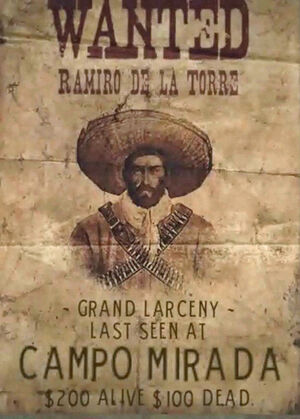 A Wanted Poster is a posted bill detailing known information about a criminal fugitive (also known as a Bounty Target) that is sought by law enforcement, including their appearance and last-known whereabouts. Wanted Posters give the player access to the Bounty Hunting side mission. Wanted posters usually entail a monetary bounty for the apprehension of a criminal.

Sometimes a wanted poster will appear with no target name and a question mark over a silhouetted face. The poster will contain location and reward information, however. This seems to occur when multiple posters are accessed from the same location on the same day or when the poster is taken immediately after posting. This also happens after completing all bounty missions in a certain area. When this happens, Marston will still know the name of the person he is hunting and will call it out as he normally does upon arriving at the target location.

Wanted posters will be posted in the following settlements.

Retrieved from "https://reddead.fandom.com/wiki/Wanted_Poster?oldid=385158"
Community content is available under CC-BY-SA unless otherwise noted.