The Watson Boys are a gang of outlaws that can be found at the Watson's Cabin in Big Valley, West Elizabeth. Led by Mama Watson, they consist entirely of her four sons.

Only Mama Watson appears in the game, as a stranger that can give missions to the player. Her sons are mentioned after completing at least one mission for her, when she states that, in addition to being charge of the gang, she plans escapes for affiliated outlaws.

Arthur has the option of interacting with, robbing, or killing Mama Watson. If she was spared, the four Watson Boys will later visit their mother to tell her about trying to use the money they get from their criminal exploits to move her out of the country. She will express disinterest in the plan.

If Arthur attempts to enter the house, the brothers will attack him, and he has the option of killing them all, subduing them, or simply running away. If all of her sons are killed, Mama Watson will curse at Arthur; she can be killed as well. If Mama Watson is left alive, the player can later find her rotting corpse in her bed during the epilogue. 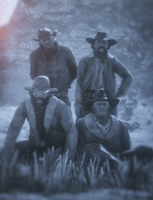 Retrieved from "https://reddead.fandom.com/wiki/Watson_Boys?oldid=408960"
Community content is available under CC-BY-SA unless otherwise noted.