Red Dead Redemption mission
We Shall Be Together in Paradise

“We just get on me raft here and let the current sweep us away to paradise.”

We Shall Be Together in Paradise is a mission featured in Red Dead Redemption.

At Brittlebrush Trawl, Irish helps John get across the river to Mexico. On the way, they get attacked by quite a few of Irish's so-called friends. Once they arrive, Irish leaves, and John is left by himself in Nuevo Paraiso.

Once on the raft, Irish will start talking for a bit, then once the other shore is within reach, there will be multiple enemies attacking from the shore. There is also a Springfield Rifle to be picked up on the crates and close by there is a container with ammunition in it. The raft will drift downriver for some time, with what seems like more enemies than Irish could make, unless he really tried, attacking from the bank. The enemies will take a break for a bit to allow Marston and Irish to discuss the lack of imagination used in American nicknames. Enemies will attack once again after the dialogue, with sometimes up to three throwing explosives (dynamite) into the water near the raft around the headways of the outcropping cliffs. As the raft continues to drift along the river, more enemies will spawn, all intent on the destruction of Irish by either bullet or dynamite. At at least one point there are TNT barrels on the cliffs to remove troublesome enemies if necessary. The raft will eventually drift onto the shore, where some horses are waiting. As you ride in, one of only three songs with lyrics plays: "Far Away" by José Gonzáles. Welcome to Mexico!

Main article: We Shall Be Together in Paradise/dialogues 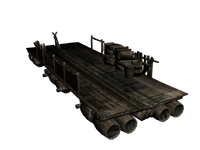 "Yes, well that's what makes you such an interesting fellow Mr. Irish."

"It seems that our friend Mr. Irish here is well connected south of the border."

"We just get on me raft here and let the current sweep us away to paradise."

"I'm not sure your idea of paradise and mine are quite the same, Irish."

"Relax. We'll have a great time and we'll find your man Williamson, no bother."

"No, but not through lack of trying."

"I'm a traveling man, sir. This land is much too small for the likes of me."

"Well, try not to get yourself killed."

"Nice of you to show for once, Irish."

"You missed all the action at Fort Mercer."

"You do know people down here? Aside from your friends who welcomed us along the way?"

"[Y]ou could try the provincial governor, Colonel something-or-other ...some Spanish name... he's based out of Escalera."

"Well, thanks a lot for your help. Oh, let me guess: You've gotta be on your way?"

"The famed hospitality isn't what it once was, and I've never been known to overstay me welcome... So, off I go to greener pastures."

"Good luck, John. You're an angry and a feck ugly man; but not a bad one."

"GoodBye Irish"
Add a photo to this gallery

Video:Red Dead Redemption Walkthrough - x360 - 024 - We Shall Be Together in Paradise
Add a photo to this gallery

Retrieved from "https://reddead.fandom.com/wiki/We_Shall_Be_Together_in_Paradise?oldid=299722"
Community content is available under CC-BY-SA unless otherwise noted.