There are a variety of weapons available in Red Dead Redemption 2. They are essential to survival, as well as an integral part of everyday life in the American West. Players will be able to modify their weapons to fit aesthetic appeal and play-style, from visual upgrades like new metals, woods, varnishes, and engravings to performance upgrades like new barrels, grips, sights, and scopes.

There are over 50 unique usable weapons, a range of options for customization, and a selection of different ammunition types to improve accuracy, range, or damage. The more a gun is used, the better it will perform, but it will also start to degrade over time if not looked after, so a firearm needs to be kept oiled and clean.

Numbered values in the following tables are the weapon stats based on its condition, these range from its default stats, modified, degraded or cleaned conditions. 1.0 is the lowest value for a firearm stat and 4.0 is the highest. Numbered values marked in italicized red text is the maximum value of a stat, which is achieved when a weapon is customized, In good condition, high familiarity and certain ammo.

These weapons can be dual-wielded. They generally have short ranges and a high firing rate. The main difference between pistols and revolvers is that pistols tend to have a higher rate of fire and a higher ammo capacity, while revolvers tend to have greater damage and more accuracy. Assuming the weapon is in good condition without customizations and familiarity boosts, each weapon's stats are as follows:

The weapons of choice for the medium-to-long range gunfight. They also can be equipped with scopes to assist players in shooting from a distance. The repeaters are well-rounded firearms with decent damages, high rates of fire and large ammo capacities. The rifles, with exception of Varmint Rifle, provide the greatest damage out of all firearms. Nevertheless, their low rate of fire and small ammo capacities make them ill-suited for the close range firefight.

Note: Players are forced to look through a scope when they take aim with Carcano Rifle or Rolling Block Rifle.

The shotguns are unmatched when it comes to inflicting damage at close range. This characteristic make them a good choice for clearing enemies out of rooms and buildings.

The Bow is given to the player for free by Charles Smith, during the mission "The Aftermath of Genesis", in order to hunt deer. The Bow can used to silently kill targets from afar, and most fired arrows are retrievable. The player can then craft and use a multitude of different to take down different targets, including both animals and gunslingers.

There are currently two weapons and a customization option for Red Dead Redemption 2 weapons that can only be found in Grand Theft Auto Online:

The Double-action Revolver promotion for the GTA Online update, The Doomsday Heist 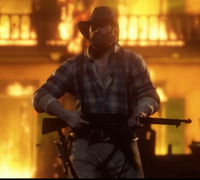 Finding and/or buying all weapons can net you these trophies/achievements: