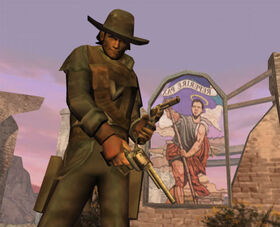 As weapons are used, their performance decreases. The player can repair weapons to bring them back to full performance by paying for repairs in the shop at the beginning of a chapter.

Retrieved from "https://reddead.fandom.com/wiki/Weapons_in_Revolver?oldid=275934"
Community content is available under CC-BY-SA unless otherwise noted.