Welcome to the New World

Welcome to the New World is a mission in Red Dead Redemption 2 which begins Chapter 5.

Having survived the shipwreck, and washed ashore on Guarma, Arthur begins searching for the gang.

Arthur wakes up on the shore of a tropical island, distraught and alone. He walks along the beach, and eventually meets back up with Dutch, Micah, Bill, and Javier at a campfire. The reunion is short however when their ambushed by a local militia led by Levi Simon who run a sugar plantation on the island. The five are put into a chain gang along with some local guerrilla rebels. Eventually, when the militia's leader is ambushed, the gang is able to steal their guns and kill the guards. But reinforcements arrive and Javier is shot. Unable to help him, the gang leaves off with Hercule Fontaine, the rebel leader, to a safe camp. 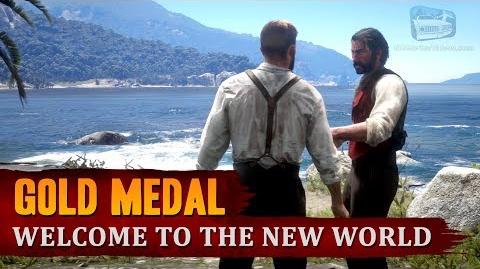