View source
watch 01:16
What is West Elizabeth?
Do you like this video?
Play Sound

West Elizabeth (known as the Commonwealth of West Elizabeth) is the smallest of the three territories featured in Red Dead Redemption.

In Red Dead Redemption 2 and Red Dead Online, it is one of the five American territories, now with an expanded region to the north.

In 1899 and 1907, it is preceded by Saint Denis in Lemoyne as a place of modernity. Regardless, it's still the modernized town in the West. Blackwater during this time is a port town going under the process of industrialization judging from the newly constructed structures sprouting within the town. As such, there is no built railway that passes Blackwater going to New Austin. Pacific Union Railroad Camp didn't exist at that time.

In 1911 and 1914, West Elizabeth is characterized as being the most modern and industrialized settlement in the West, the thriving port town of Blackwater, which also serves as the state's capital. The state is distinguished from others due to its uniformed police force, cobbled roads, and named streets.

There are two major settlements in West Elizabeth: Blackwater and Strawberry. There are also camps, ranches, and homesteads that dot within the territory. In 1911, it is the home to a large Native American population, many of whom are members of Dutch's Gang.

The landscape progresses from rolling grasslands in the Great Plains region through snow-capped, impassable mountains around the edges of Tall Trees. To the north lies Big Valley, which falls under the foot of Mount Shann. The resemblance of Tall Trees persists northwards until near the vicinity of Strawberry where the elevation gets higher. The area is mountainous and slightly forested with patches of meadows surrounding the base of the mountain.

Much like other American states featured in the series, West Elizabeth is an amalgam of various states in the Western United States. Geographically, West Elizabeth appears to roughly correspond with Texas, Kansas, Colorado, and Oklahoma, although visually Big Valley and Tall Trees are closer to regions in California.

Because there is an overlap area that links the original map with new areas of Red Dead Redemption 2, West Elizabeth is one of the most geographically diverse states in the series. In all, its terrain broadly reflects numerous characteristics that can be found across many real-life states west of the Mississippi River, from the Great Plains and Rocky Mountains to the redwood forests of northern California. In turn, West Elizabeth’s people reflect everything from eastern city and riverboat-based societies to mountain fur trade and forestry cultures.

Due to a failed ferry robbery carried out by the Van der Linde gang in Blackwater, the area is semi-restricted and under constant guard by Pinkertons. Crossing towards Great Plains and Tall Trees will result in a maximum wanted level; Arthur will be shot at on sight when seen by lawmen, except during the mission "The First Shall Be Last". However, Arthur is prevented from reaching New Austin, as there is an invisible sniper that will kill him with a single shot.

Towards the end of the game, the rest of West Elizabeth is unlocked and fully accessible as well as New Austin. The player will control John Marston by this time, following the completion of "Red Dead Redemption". The focus of the game remains in West Elizabeth until the conclusion of the epilogue.

The game's opening cinematic begins with John Marston arriving in the region by steamboat, escorted by Federal Bureau agents Edgar Ross and Archer Fordham. The cinematic then transports the story to New Austin before giving control to the player. The player does not gain access to West Elizabeth again until the third chapter in the game's storyline, following completion of the mission "An Appointed Time." The focus of the game remains in West Elizabeth through the conclusion of the main storyline.

The flag of West Elizabeth

Great Plains from above

Big Valley, as seen from across the Upper Montana River

A map showing the shape and the borders of West Elizabeth 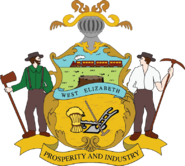 The discovery of locations in West Elizabeth count towards the following Trophies/Achievements: