Who Are You to Judge?

Who Are You to Judge? is a Stranger side-mission featured in Red Dead Redemption.

A man named Jeb Blankenship in Rathskeller Fork asks Marston to find his lost love, who has been kidnapped by gangsters in Tumbleweed.

Before this Stranger appears on the world map, the player must complete: 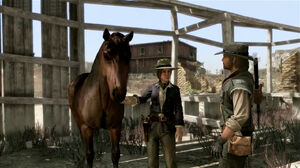 Start the mission by talking to Jeb in Rathskeller Fork.

Head over to the "?" blip in Tumbleweed. If necessary, fight the enemies that show up in this location and complete the hideout. You will find Jeb's horse and Ann Stephenson here.

Go back to Jeb with his horse. The woman will ride it back for you, so you don't have to lasso the horse all the way back. Also, if you're riding too fast for the woman, she'll just meet you at Rathskeller Fork instead, so you can just go there as fast as possible to complete the mission.

Retrieved from "https://reddead.fandom.com/wiki/Who_Are_You_to_Judge%3F?oldid=417048"
Community content is available under CC-BY-SA unless otherwise noted.