Found throughout the New Austin area, these short white flowers on green leaf beds are primarily found south-west of Thieves' Landing, around Hennigan's Stead and in the surrounding area of Armadillo.

Wild Feverfew is a vendible good in Red Dead Redemption. They are a type of plant that the player can harvest and sell to merchants for money ($1 each), or can be used by the player to create Undead Bait.

Wild Feverfew is a small bush that can be identified by the large yellow disc florets, short white petals, and small leaves. This bush is native to Cholla Springs, New Austin, and is easily recognizable against the harsh soil. This plant can be consumed to replenish your Stamina Core or used when crafting Bitters.[1] 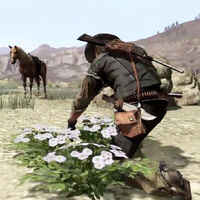 Gathering plants and flowers contributes toward the following trophies/achievements:

Gathering these flowers contributes to this trophy/achievement:

Retrieved from "https://reddead.fandom.com/wiki/Wild_Feverfew?oldid=419697"
Community content is available under CC-BY-SA unless otherwise noted.