William is a minor character and Stranger in Red Dead Redemption 2. He initiates the Stranger side-mission "To the Ends of the Earth".

William can be found by the player south of Twin Stack Pass in The Heartlands. He is set up at a small camp containing a wagon, a tent and a storage area for his plant and herb collection.

During this side mission, William requests that the player brings him some Yarrow. Upon delivery, William tastes the Yarrow, claiming it to have medicinal qualities; he then gives the player a crafted remedy as a reward.

Following the mission, William can later be found other times as a random encounter in the wilderness, where he will ask the player to collect more plants in exchange for other tonics. After a few encounters he tells the player that he is leaving and that they may never cross paths again and bids farewell.

Despite saying this, William can actually still be found across the five states as a random encounter, but may still say the same thing. 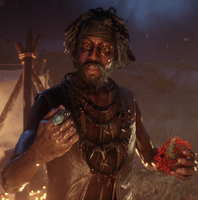 William's camp in The Heartlands