Withered Arm is a point of interest featured in Red Dead Redemption 2.

The corpse of an elderly man can be found lying face-down in a marsh southwest of Saint Denis. The body is wearing blue denim dungarees and has one deformed hand that is about the size of that of a baby and the other one is dug in mud, seemingly lacking the hand. 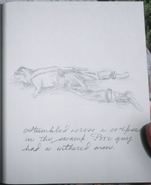 Arthur's drawing: "Stumbled across a corpse in the swamp. Poor guy had a withered arm." 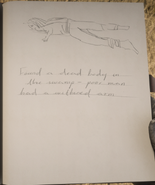 John's drawing: "Found a dead body in the swamp, poor man had a withered arm." 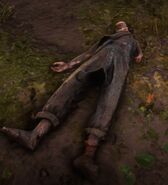 Another position he can be found in, revealing both arms.