Wolves are carnivores, and will usually hunt in groups, relying on speed, agility and their ability to cooperate and separate their prey from other animals. The player can encounter wolves in the wilderness, and hunt them. Wolves may also attack the player, their mount, and NPCs. Players need to stay alert, as they will often attack from behind. The player should listen for their howling or barking in the background; unlike coyotes, they have deeper barking noises. Like cougars, they are notorious for interrupting the player in the most uncalled-for moments. They are 4.5 ft long and weigh 75-100 lbs. They feed on rabbits, bighorn sheep, elk, deer, boars, buffaloes, skunks, armadillos, raccoons, horses, foxes, coyotes and even cougars. Packs of wolves are extremely aggressive, and can even dispatch bears with relative ease.

They hunt in large groups of up to ten wolves, so if the player encounters a small pack of four to five wolves, then they should either move on quickly, or get ready to take on another group of wolves. Sometimes, the wolves keep coming in waves of three to five; this can go on and on until the player has killed as many as 60+ wolves. Wolves, unlike coyotes, are not afraid of gunfire; however, they may begin to run away if another wolf is killed, or if they are shot at, especially when using a shotgun. Single wolves occasionally spawn, and are more timid than in packs. These lone wolves will only bite the player once before running in fear. Also, unlike when in groups, they can be scared off prior to biting by firing any weapon, similar to coyotes.

Wolves are very fast; therefore, a kill by gunfire can be difficult without Dead Eye. A substitute is using the Hunting Knife; wolves have low health, and can easily be killed with several slices. Be wary, however, of how easily a wolf can drain a player's health. When a wolf latches onto a player's arm, the player cannot fire until it is shaken off, and it only takes around three to four bites to kill a player. Usually when using the knife, an entire pack attacking at once is not a problem, as wolves do not keep a constant speed with each other, so one will usually follow another, not them all attacking at once, a few quick stabs can easily kill off a wolf before another arrives. The Bolt Action rifle is unquestionably the best weapon in the game against wolves, as it is powerful enough to kill a wolf in one shot no matter where it is hit (though it may limp for a couple of seconds before collapsing, during which it is completely harmless), and its higher ammo capacity makes it better in dealing with entire packs when compared to the Buffalo Rifle .

A good tactic is to use a Sawed-off Shotgun and fire off a couple of random shots. Wolves aren't afraid of most gunfire, but they are afraid of shotgun fire, so firing it will cause them to turn and run away, giving the player a chance to regenerate health, and pursue if desired.

To easily kill a wolf with a melee knife, allow the wolf to latch onto Marston's arm, and press the fire button. Marston will kill the wolf with a single swipe. This occasionally works with guns, but usually the wolf is thrown first.

The bottom east corner of West Elizabeth is a good spot to hunt wolves - the wolves will come in packs of 3-5, so the damage per wave is minimal. As long as the player stands by the corpses, as many as 50 wolves can be killed in a matter of a few minutes. Be careful, however, as cougars can come from behind while the player hunts the wolves. Make sure to save frequently.

Lure a pack of wolves towards any bears, or vice versa, and they will proceed to fight. Bears will kill an attacking wolf with one swipe of their paws.

If there are any rattlesnakes in the area, the wolves will go out of their way to kill them, even if that means to stop attacking the player. Dead rattlesnakes can often be found when wolf hunting.

For this trick, get some Bait, Medicine and Tobacco (Moonshine, Snake Oil, and Tonic also helps). It is also useful to be near the Manteca Falls and Butter Bridge area. Having a horse or mule deed means calling a new one if the wolves kill the horse or mule.

To easily amass money, find a spot where there are wolves, then drop down 2-3 baits. Kill and skin all animals that come into the area. After a relatively short time, there will be wolves howling. Using a combination of Dead Eye and rapid aim, shoot and kill as many of the incoming wolves as possible. They usually attack in packs of 3-6 animals. There's no need to kill the whole pack at once - killing one or two, the rest will usually flee and come back later. Don't skin the wolves, as this leaves the player open to attacks.

If the wolves kill Marston's mount or any snakes, he can also skin them for additional profit, meaning the player will have a huge supply of wolf pelt, wolf meat, and wolf heart, along with horse or mule meat/hide from the previous mount, and snake skin if the wolves killed any snakes before they attacked the player. In addition ,wolves will fight bears should they be nearby each other, so there is also a chance of grizzly loot as well.

They come in packs. Lucky you...

Wolves are fearless in packs. 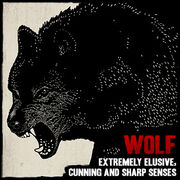 Shadow Wolf facing off against a wolf.

The player must kill a wolf to successfully complete the following achievements/trophy's: