Yago is a member of the Banditos.

Yago is encountered in the mission "The Gunslinger's Tragedy", in which he holds hostage the wagon driver Fermin Ichinaga. Yago is killed in an attempt to get the wagon back.

However, despite his supposed death, he can most often be found around Casa Madrugada, frequently loitering inside the cantina or playing Liar's Dice. He can also be encountered at the Tesoro Azul gang hideout in Multiplayer, and in the Fort Mercer gang hideout in Single Player, where he will be hostile even if the player is wearing the Bandito Outfit.

Yago running away from John Marston. 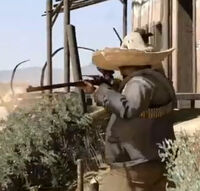 Retrieved from "https://reddead.fandom.com/wiki/Yago_Alejandres?oldid=398613"
Community content is available under CC-BY-SA unless otherwise noted.