Zebedee Nash is a minor character and a bounty target featured in Red Dead Redemption.

Zebedee is a Criminal wanted for murder and can be captured or killed depending on the player's choice.

Zebedee makes two appearances during the mission "On Shaky's Ground". First, he is seen yelling at a prostitute before entering the brothel. Immediately after crossing the bridge, Zebedee is seen alongside Americus Roe and Elmore Vinnis as they try to intimidate Rufus Starkey.

Zebedee can most often be found around Thieves' Landing, frequently loitering inside the saloon and around the brothel. He can also be encountered at the Tumbleweed gang hideout, though he will be hostile.

Zebedee can also be seen in a random encounter, in which he is running away from two lawmen. Marston can either shoot him or save him by shooting the pursuing lawmen. 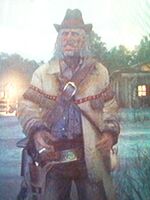 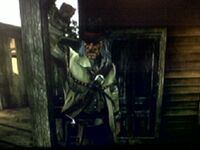 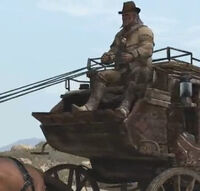 Zebedee riding a Stagecoach
Add a photo to this gallery
Retrieved from "https://reddead.fandom.com/wiki/Zebedee_Nash?oldid=383303"
Community content is available under CC-BY-SA unless otherwise noted.